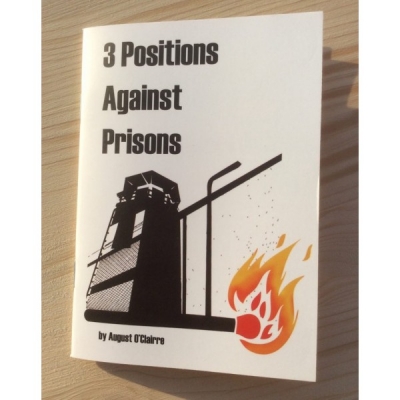 A collection of short texts about prisons by August O’Clairre.

The approaches of innocence and amnesty shouldn’t draw a knee-jerk criticism, but rather should be placed in the context of the politics from which they are derived–a politics that appeals to those who love the law, and a politics of war between different forms of government.

Excerpt:
“One and a half centuries ago, slavery was abolished (by the US government). This followed an enormous social struggle over abolition – wars were fought between pro-slavery elements and abolitionist elements. There were slave revolts and uprisings. The government intervened. And the Thirteenth Amendment ever-so-neatly includes a loophole allowing for the enslavement of prisoners (“except as a punishment for crime whereof the party shall have been duly convicted”). Moreover, the economic system of chattel slavery was replaced with indentured servitude and industrial wage labour – which the Northern capitalists were struggling to proliferate. So today, we have slavery, although slavery has been abolished. The structures of society that required slaves have remained intact. And in one hundred years, prisons may be abolished, but we will still have prisons as long as capitalism remains intact.”