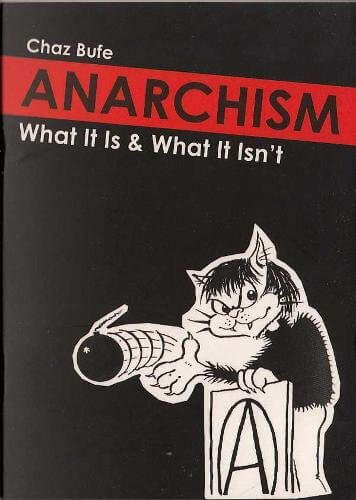 There are many popular misconceptions about anarchism, and because of them a great many people dismiss anarchists and anarchism out of hand.

Misconceptions abound in the mass media, where the term “anarchy” is commonly used as a synonym for “chaos,” and where terrorists, no matter what their political beliefs or affiliations, are often referred to as “anarchists.” As well, when anarchism is mentioned, it’s invariably presented as merely a particularly mindless form of youthful rebellion. These misconceptions are, of course, also widespread in the general public, which by and large allows the mass media to do what passes for its thinking.

Worse, some who call themselves “anarchists” don’t even know the meaning of the term. These people fall, in general, into two classes. The first, as the great Italian anarchist Luigi Fabbri pointed out nearly a century ago in Influencias burguesas sobre el anarquismo, consists of those who are attracted to the lies in the mass media. By and large, these people are simply looking for a glamorous label for selfish, antisocial behavior. The good news is that most of them eventually mature and abandon what they consider “anarchism.” The bad news is that while they’re around they tend to give anarchism a very bad name. As Fabbri put it:

[These are] persons who are not repelled by the absurd, but who, on the contrary, engage in it. They are attracted to projects and ideas precisely because they are absurd; and so anarchism comes to be known precisely for the illogical character and ridiculousness which ignorance and bourgeois calumny have attributed to anarchist doctrines.1

The second class consists of those who equate anarchism with some pet ideology having essentially nothing to do with anarchism. In modern times, the most prominent of these mislabeled beliefs have been primitivism and amoral egotism. Again, the identification of such beliefs with anarchism tends to give anarchism a bad name, because of, on the one hand, the absurdity of primitivism and, on the other, the obvious antisocial nature of amoral egotism. To put this another way, the identification of anarchism with chaos, mindless rebellion, absurdities (such as primitivism), and antisocial attitudes and behaviors (such as amoral egotism) has three primary undesirable effects: 1) it allows people to easily dismiss anarchism and anarchists; 2) it makes it much more difficult to explain anarchism to them, because they already think that they know what it is and have rejected it; and 3) it attracts a fair number of what Fabbri calls “empty headed and frivolous types,” and occasionally outright sociopaths, whose words and actions tend to further discredit anarchism.

So, if we’re ever to get anywhere, we need to make plain what anarchism is and what it isn’t. First, let’s deal with the misconceptions.