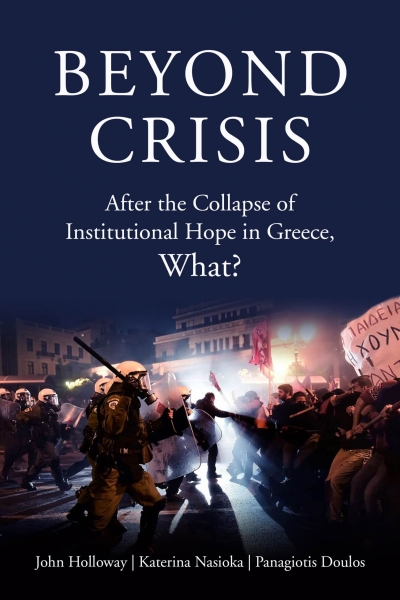 Beyond Crisis: After the Collapse of Institutional Hope in Greece, What?

Editors: John Holloway, Katerina Nasioka, and Panagiotis Doulos
The essays in this collection reflect on the experience of the crisis in Greece and its political implications for the whole world.

The government led by Syriza in Greece, elected in January 2015, at first seemed to be the most radical European government in recent history. It proclaimed itself the “Government of Hope” and throughout the world symbolized the hope that radical change could be achieved through institutional politics. The referendum of July 2015 rejected the austerity imposed by the banks and the European Union but was followed by a complete reversal of the government’s position and its acceptance of that austerity.

The collapse of hope that accompanied the failure of the institutional Left opened the way to the return of the right-wing New Democracy Party, with a more aggressive program than ever. The essays collected in Beyond Crisis, among other things, form a case study of the “Greek experiment” that points to deeper implications concerning the global upsurge of disillusioned anger that has spurred the rise of far-right populism and support for strong leaders, exclusion of ethnic minorities, and greater “racial purity.”

The Syriza government’s dramatic crash showed the limits of institutional politics, a lesson apparently overlooked by the enthusiastic followers of Jeremy Corbyn and Bernie Sanders. But it also poses profound questions for those who reject state-centered politics. The anarchist or autonomist movement in Greece has been one of the strongest in the world, yet it has failed to have a significant impact in opening up alternative perspectives.

So how do we pick up the pieces? What direction should we follow from now on? How do we understand what happened and learn from it? The essays in this collection do not point to a single conclusion or path forward but rather raise questions that remain open about how to move beyond the current crisis amid a darkening sky of seeming impossibility.