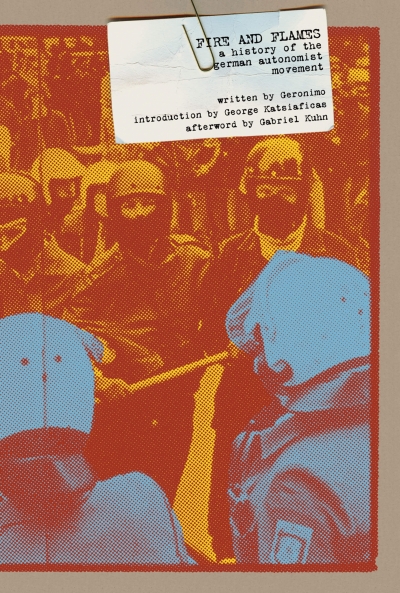 Fire and Flames: A History of the German Autonomist Movement

Fire and Flames was the first comprehensive study of the German autonomous movement ever published. Released in 1990 with the legendary German Konkret journal concluding that “the movement had produced its own classic.

Fire and Flames was the first comprehensive study of the German autonomous movement ever published. Released in 1990, it reached its fifth edition by 1997, with the legendary German Konkret journal concluding that “the movement had produced its own classic.” The author, writing under the pseudonym of Geronimo, has been an autonomous activist since the movement burst onto the scene in 1980-81. In this book, he traces its origins in the Italian Autonomia project and the German social movements of the 1970s, before describing the battles for squats, “free spaces,” and alternative forms of living that defined the first decade of the autonomous movement. Tactics of the “Autonome” were militant, including the construction of barricades or throwing molotov cocktails at the police. Because of their outfit (heavy black clothing, ski masks, helmets), the Autonome were dubbed the “Black Bloc” by the German media, and their tactics have been successfully adopted and employed at anticapitalist protests worldwide.

Fire and Flames is no detached academic study, but a passionate, hands-on, and engaging account of the beginnings of one of Europe’s most intriguing protest movements of the last thirty years. An introduction by George Katsiaficas, author of The Subversion of Politics, and an afterword by Gabriel Kuhn, a long-time autonomous activist and author, add historical context and an update on the current state of the Autonomen.

About the Author:
The author, writing under the pseudonym of Geronimo, has been an autonomous activist since the movement burst onto the European scene in 1980-81.

About Gabriel Kuhn (Afterword):
Gabriel Kuhn lives as an independent author and translator in Stockholm, Sweden. His previous publications with PM Press include Life Under the Jolly Roger: Reflections on Golden Age Piracy (2010), Sober Living for the Revolution: Hardcore Punk, Straight Edge, and Radical Politics (editor, 2010), Gustav Landauer: Revolution and Other Writings (editor/translator, 2010), and Soccer vs. the State: Tackling Football and Radical Politics (2011).

About George Katsiaficas (Introduction):
George Katsiaficas is currently living in Gwangju, South Korea. A visiting professor of sociology at Chonnam National University, he is finishing research on East Asian uprisings in the 1980s and 1990s. A Fulbright Fellow, student of Herbert Marcuse, and long-time activist, he is the author of The Imagination of the New Left: A Global Analysis of 1968. His book, The Subversion of Politics: European Autonomous Social Movements and the Decolonization of Everyday Life, was co-winner of the APSA’s 1998 Michael Harrington book award. Among his edited volumes are Liberation, Imagination and the Black Panther Party (with Kathleen Cleaver) and Vietnam Documents: American and Vietnamese Views of the War.