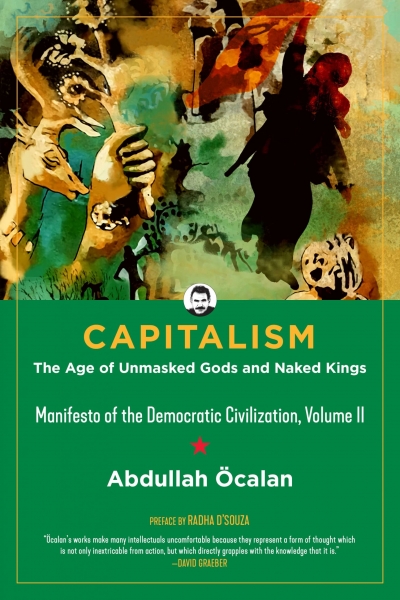 Capitalism: The Age of Unmasked Gods and Naked Kings

(Manifesto of the Democratic Civilization, Volume II), Second Edition
by Abdullah Öcalan
The second volume of Öcalan’s five-volume work making the convincing argument that capitalism is not a product of the last four hundred years but a continuation of classical civilization.

Capitalism: The Age of Unmasked Gods and Naked Kings is the second volume of Abdullah Öcalan’s definitive five-volume work The Manifesto of the Democratic Civilization. For years he has unraveled the sources of hierarchical relations, power, and the formation of nation-states that has led to capitalism’s emergence and global domination. He makes the convincing argument that capitalism is not a product of the last four hundred years but a continuation of classical civilization.

Unlike Marx, Öcalan sides with Braudel by giving less importance to the mode of production than to the accumulation of surplus value and power, thus centering his criticisms on the capitalist nation-state as the most powerful monopoly of economic, military, and ideological power. He argues that the fundamental strength of capitalist hegemony, however, is the competition in voluntary servitude that a market economy has given rise to—not a single worker would reject higher wages—resulting in an unprecedented ability to convince people to surrender their individual power and autonomy. Öcalan further contends that the capitalist phase of city-class-state-based civilization is not the last phase of human intelligence; rather, the traditional morals upon which it is based are being exhausted and the intelligence of freedom is rising in all its richness. That is why he prefers to interpret capitalist modernity as the era of hope—but only insofar as we are able to develop a sustainable defense against it.