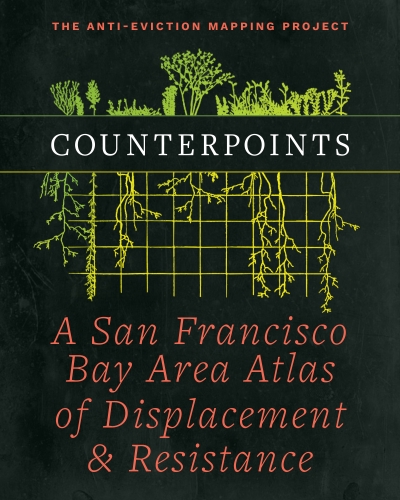 ~New Releases, Books, Cities: Architecture & Urbanism
A San Francisco Bay Area Atlas of Displacement & Resistance
A collaborative, co-created atlas aimed at expanding knowledge on displacement and resistance in the Bay Area with, rather than for or about, those most impacted.

Counterpoints: A San Francisco Bay Area Atlas of Displacement and Resistance brings together cartography, essays, illustrations, poetry, and more in order to depict gentrification and resistance struggles from across the San Francisco Bay Area and act as a roadmap to counter-hegemonic knowledge making and activism. Compiled by the Anti-Eviction Mapping Project, each chapter reflects different frameworks for understanding the Bay Area’s ongoing urban upheaval, including evictions, indigenous geographies, health and environmental racism, state violence, transportation and infrastructure, migration and relocation, and speculative futures. By weaving these themes together, Counterpoints expands normative urban-studies framings of gentrification to consider more complex, regional, historically grounded, and entangled horizons for understanding the present. Understanding the tech boom and its effects means looking beyond San Francisco’s borders to consider the region as a socially, economically, and politically interconnected whole and reckoning with the area’s deep history of displacement, going back to its first moments of settler colonialism. Counterpoints combines the project’s work with contributions by community partners, from longtime community members who have fought multiple waves of racial dispossession to elementary school youth envisioning decolonial futures. In this way, Counterpoints is a collaborative, co-created atlas aimed at expanding knowledge on displacement and resistance in the Bay Area with, rather than for or about, those most impacted.

About the editorial collective behind Counterpoints:
The Anti-Eviction Mapping Project (AEMP) is a data visualization, critical cartography, and multimedia storytelling collective that documents displacement and resistance struggles on gentrifying landscapes. With chapters in the San Francisco Bay Area, New York City, and Los Angeles, the collective works with numerous community partners and housing justice networks in order to provide data, maps, stories, and tools for resisting displacement. AEMP has produced hundreds of maps, oral histories, and multimedia pieces, as well as dozens of community events and reports, and numerous academic and public facing articles, book chapters, and murals. AEMP’s work has been presented in a variety of venues, from art galleries and collectives to neighborhood block parties, from academic colloquia and conferences to community workshops and book fairs.

About the contributors of the Forewords