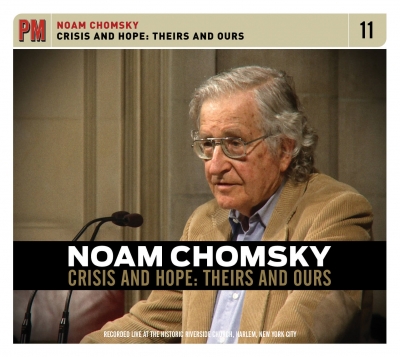 Crisis and Hope: Theirs and Ours (CD)

Noam Chomsky
An audio CD of Noam Chomsky’s historic address in June 2009 at Riverside Church in New York including an introduction by Amy Goodman.

More than 2,000 people attended this historic address, captured here, in which Chomsky offered a powerful analysis of the current economic crisis and its structural roots; the continuity in U.S. foreign policy under the Barack Obama administration; and the class interests driving U.S. domestic and foreign policy. He also speaks here at length about the tradition of worker self-management as a concrete alternative to the business as usual approach of corporations and the government during the current crisis. The CD also features an introduction by Amy Goodman.

About Noam Chomsky:
Noam Chomsky was born in Philadelphia, Pennsylvania, on December 7, 1928. He studied linguistics, mathematics, and philosophy at the University of Pennsylvania. In 1955, he received his Ph. D. from the University of Pennsylvania. Since receiving his Ph. D., Chomsky has taught at Massachusetts Institute of Technology, where he is Institute Professor in the Department of Linguistics and Philosophy. His work is widely credited with having revolutionized the field of modern linguistics. Chomsky is the author of numerous best-selling political works, which have been translated into scores of countries worldwide. His most recent books are the New York Times bestseller Hegemony or Survival, Failed States, Imperial Ambitions, What We Say Goes, Interventions, and The Essential Chomsky. His website is www.chomsky.info.