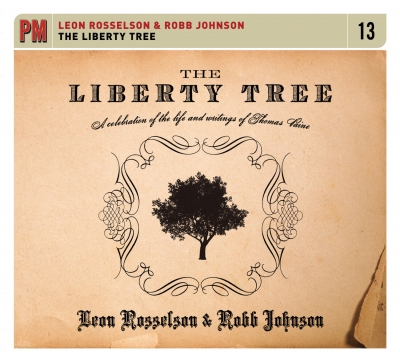 Leon Rosselson and Robb Johnson
A unique blend of words and music that reflect on Thomas Paine’s life and writings, connecting them to the challenges of the 21st century.

“When the rich plunder the poor of his rights, it becomes an example to the poor to plunder the rich of his property.” –Thomas Paine

The Liberty Tree tells the story of Tom Paine’s extraordinary life, interweaving Paine’s own words, from his letters and the pamphlets which made him one of the most influential and dangerous writers of his age, with extracts from newspaper reports, diaries, letters and other documents of the times. The songs of Robb Johnson and Leon Rosselson add another dimension to the story, reflecting Paine’s radical ideas and evaluating them in the context of the 21st century. This unique blend of words and music challenges received opinion in the same way Paine’s writings did

Leon Rosselson has been at the forefront of songwriting in England for 50 years. His songs range from the lyrical to the satirical, from the personal to the political, from the humorous to the poignant. His best known song, The World Turned Upside Down, has been recorded by, amongst others, Dick Gaughan, John McCutcheon, and Billy Bragg (who took it into the pop charts in 1985) and has been sung on numerous demonstrations in Britain and the U.S.

Robb Johnson is now widely recognised as one of the finest songwriters working in the UK today. His songs feature in the repertoires of a wide variety of musicians, from folk legend Roy Bailey to acclaimed cabaret diva Barb Jungr, and he enjoys a similarly diverse spectrum of critical acclaim.

See and hear musician interviews, book reviews, and other news on the Musicians’ Page HERE