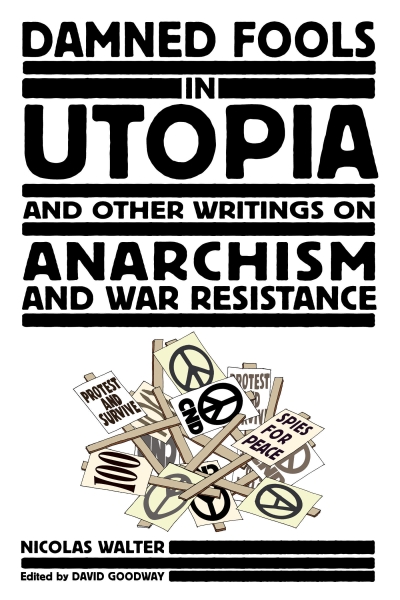 Damned Fools in Utopia: And Other Writings on Anarchism and War Resistance

Nicolas Walter
Nicolas Walter scorned the pomp and frequent ignorance of the powerful and detested the obfuscatory prose and intellectual limitations of academia. The items collected in this volume display him at his considerable best.

Nicolas Walter was the son of the neurologist, W. Grey Walter, and both his grandfathers had known Peter Kropotkin and Edward Carpenter. However, it was the twin jolts of Suez and the Hungarian Revolution while still a student, followed by participation in the resulting New Left and nuclear disarmament movement, that led him to anarchism himself. His personal history is recounted in two autobiographical pieces in this collection as well as the editor’s introduction.

During the 1960s he was a militant in the British nuclear disarmament movement – especially its direct-action wing, the Committee of 100 – he was one of the Spies for Peace (who revealed the State’s preparations for the governance of Britain after a nuclear war), he was close to the innovative Solidarity Group and was a participant in the homelessness agitation. Concurrently with his impressive activism he was analyzing acutely and lucidly the history, practice and theory of these intertwined movements;  and it is such writings – including Non-violent Resistance and The Spies for Peace and After – that form the core of this book. But there are also memorable pieces on various libertarians, including the writers George Orwell, Herbert Read and Alan Sillitoe, the publisher C.W. Daniel and the maverick Guy A. Aldred. The Right to be Wrong is a notable polemic against laws limiting the freedom of expression. Other than anarchism, the passion of Walter’s intellectual life was the dual cause of atheism and rationalism;  and the selection concludes appropriately with a fine essay on Anarchism and Religion and his moving reflections, Facing Death.

Nicolas Walter scorned the pomp and frequent ignorance of the powerful and detested the obfuscatory prose and intellectual limitations of academia. He himself wrote straightforwardly and always accessibly, almost exclusively for the anarchist and freethought movements. The items collected in this volume display him at his considerable best.

About the Author:
Nicolas Walter (1934-2000) was one of the best-known and mostly widely read anarchist writers of the last half century. His About Anarchism has been translated into many languages, including Russian, Serbo-Croat, Greek, Turkish, Chinese and Japanese, and its popularity is said to have led anarchist parents to name their boys ‘Nicolas’. But his immense output was otherwise overwhelmingly journalism for the libertarian press. It is only with The Anarchist Past and Other Essays (Five Leaves, 2007), a virtual history of anarchism reaching from its prehistory in the American Revolution to the work of Murray Bookchin and Colin Ward, and the present volume that libertarians today are enabled to appreciate his range, erudition and readability.

About the Editor:
David Goodway is a British social and cultural historian who for twenty years has written principally on anarchism and libertarian socialism. He is the editor of For Anarchism, Herbert Read Reassessed, The Letters of John Cowper Powys and Emma Goldman and collections of the writings of Alex Comfort, Herbert Read, Maurice Brinton and Nicolas Walter. His conversations with Colin Ward have been published as Talking Anarchy.  PM is soon to bring out a new edition of his recent major book, Anarchist Seeds Beneath the Snow: Left-Libertarian Thought and British Writers from William Morris to Colin Ward.