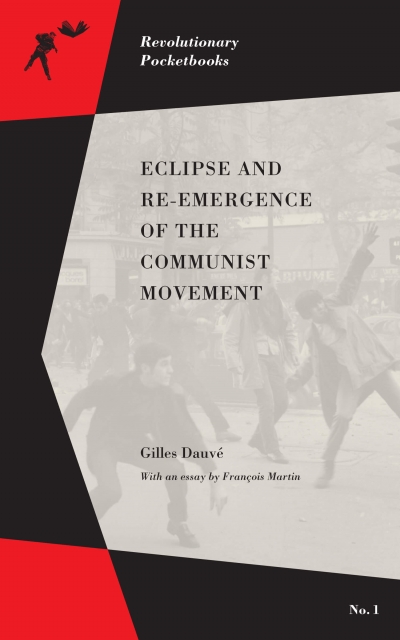 Eclipse and Re-emergence of the Communist Movement

Doing away with wage-labor, class, the State, and private property is possible, and can only be achieved by a historical break, it will not be a peaceful, gradual, piecemeal evolution.

In the years following 1968, a number of people involved in the most radical aspects of the French general strike felt the need to reflect on their experiences and to relate them to past revolutionary endeavors. This meant studying previous attempts and theories, namely those of the post-1917 German-Dutch and Italian Communist Left. The original essays included here were first written between 1969 and 1972 and circulated amongst left communist and worker circles.

But France was not the only country where radicals sought to contextualize their political environment and analyze their own radical pasts. Over the years these three essays have been published separately in various languages and printed as books in both the United States and the UK with few changes. This third English edition is updated to take into account the contemporary political situation; half of the present volume is new material.

The book argues that doing away with wage-labor, class, the State, and private property is necessary, possible, and can only be achieved by a historical break, one that would certainly differ from October 1917 . . . yet it would not be a peaceful, gradual, piecemeal evolution either. Like their historical predecessors—Marx, Rosa Luxemburg, Anton Pannekoek, Amadeo Bordiga, Durruti, and Debord—the authors maintain a belief in revolution.

Born in Algeria in a family of European settlers in 1941, François Cerruti (pen name François Martin) evaded the draft and supported Algerian independence. After 1962, he worked in a self-managed factory and was a member of the local section of the Trotskyist Fourth International. The 1965 army putsch forced him to go to France, where he had to do his military service. While a soldier, his participation in a mutiny sent him to jail for a few months. In the 1968 general strike, he was involved in the worker radical minority, and later active in “libertarian communist” or “ultra-leftist” or simply communist circles.