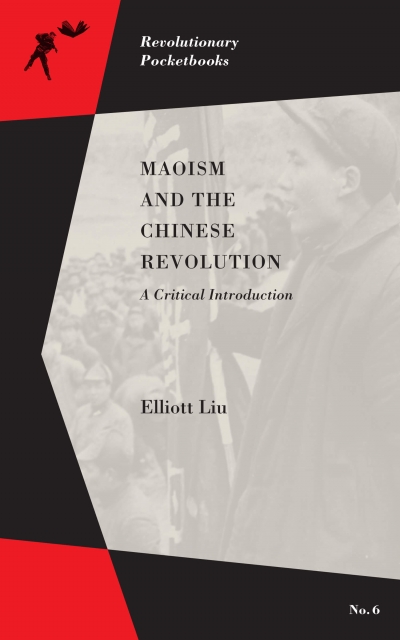 Maoism and the Chinese Revolution: A Critical Introduction

Maoism and the Chinese Revolution offers the novice reader a sweeping overview of five decades of Maoist revolutionary history.

#6 In the Revolutionary Pocketbooks series

The Chinese Revolution changed the face of the twentieth century, and the politics that issued from it—often referred to as “Maoism”—resonated with colonized and oppressed people from the 1970s down to the anticapitalist movements of today. But how did these politics first emerge? And what do they offer activists today, who seek to transform capitalist society at its very foundations?

Maoism and the Chinese Revolution offers the novice reader a sweeping overview of five decades of Maoist revolutionary history. It covers the early years of the Chinese Communist Party, through decades of guerrilla warfare and rapid industrialization, to the massive upheavals of the Cultural Revolution. It traces the development of Mao Zedong’s military and political strategy, philosophy, and statecraft amid the growing contradictions of the Chinese revolutionary project. All the while, it maintains a perspective sympathetic to the everyday workers and peasants who lived under the party regime, and who in some moments stood poised to make the revolution anew.

From the ongoing “people’s wars” in the Global South, to the radical lineages of many black, Latino, and Asian revolutionaries in the Global North, Maoist politics continue to resonate today. As a new generation of activists take to the streets, this book offers a critical review of our past in order to better transform the future.

“In Maoism and the Chinese Revolution, Elliott Liu provides a dual service: first, he offers a critical history of Maoism that is both comprehensive and concise; second, he teases out the main lessons of that history and poses the question of how and what we are to learn from it. It is an auspicious beginning to a badly needed debate.”
—André Moncourt, coauthor of The Red Army Faction: A Documentary History

“How did a great revolution, carried out under the red flag and led by people who claimed, and believed themselves, to be communists, give rise to a monster slave state that may prolong the life of the capitalist system globally? By presenting information about events in China and engaging seriously with Mao Zedong as philosopher and strategist, Elliott Liu shows that the outcome did not result from the triumph of Mao’s ‘capitalist road’ opponents within the bureaucracy but was inherent in a project that sought to transform China into a capitalist society without relying on the traditional bourgeoisie. Liu has contributed to the discussion of what, if anything, in the Maoist tradition can be useful to those seeking to build a new society.”
—Noel Ignatiev, author of How the Irish Became White

Elliott Liu is a political organizer in New York City. He works with the group Take Back The Bronx, and the Bronx Social Center.