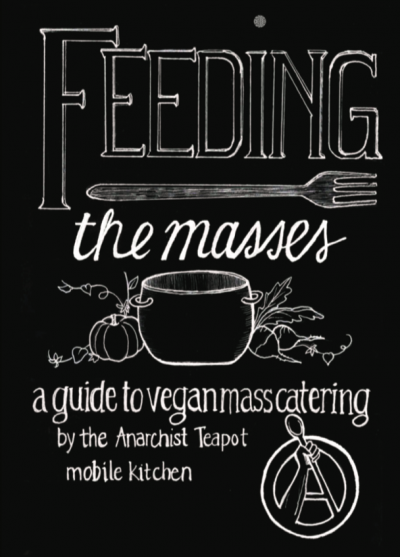 Feeding the Masses: a guide to vegan mass catering

A guide to mass vegan catering by the Anarchist Teapot Mobile Kitchen.

A practical guide to cooking for large numbers of hungry vegans, whether in a community centre or in a field, covering logistics, equipment, cooking tips plus a whole bunch of recipes!

Including lessons learnt from feeding thousands at the anti-G8 mobilisation in Scotland during 2005.

Compiled by the anarchist teapot – cooking vegan organic and affordable food for the anarchist hordes of Britain from 1998011, not for profit or wages but out of love and rage!!!

“Over the years the Anarchist Teapot mobile kitchen was often asked for advice on mass catering. I got tired of writing the same stuff over and over again in emails, so I took it on to compile an info booklet. I thought about 10 people would be interested in it, but we’ve printed and reprinted countless copies – for some bizarre reason, there seems to be a lot of you interested in cooking massive pots of vegan food.

So here’s a new and updated reprint. Some things had gone a bit out of date, and I’ve also tried to re-organise the zine so it’d be more useful for cooking in different settings, not just a field. Plus some disclaimers to start with – this is entirely based on our own, specific experiences, and what I’d say if you asked me, how do I cook for 150 people? It’s also entirely based on our own motivations to cook. To us, it’s not to do with making profits or even paying ourselves, but entirely to do with wanting to fulfil a role in the communities we build when we engage in grassroots resistance to the status quo. And we’ve found feeding people delicious food is a great way of consolidating community.”

Reprinted by Active as a slim A5 book.