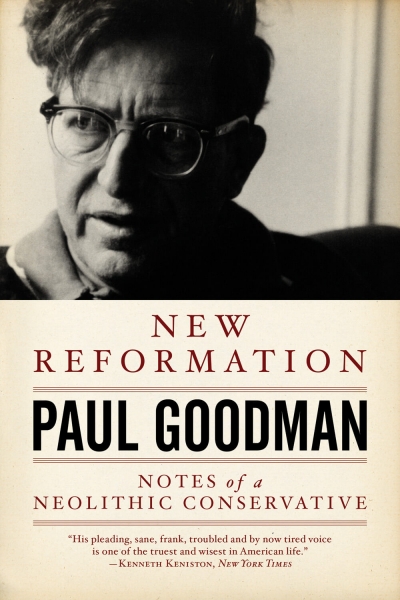 Emphasizing the importance of culture and the arts in society, this reprint of a 1960s classicâthe author’s last book of social criticismâincludes a new introduction that situates the late Paul Goodman in his era.

New Reformation was Paul Goodman’s last book of social criticism. The man who set the agenda for the Youth Movement of the Sixties with his best-selling Growing Up Absurd, and who wrote a book a year to keep his “crazy young allies” focused on the issues as he saw them, stepped back in 1970 to re-assess the results of what he considered a moral and spiritual upheaval comparable to the Protestant Reformation–“the breakdown of belief, and the emergence of new belief, in sciences and professions, education, and civil legitimacy.”

Michael Fisher’s introduction situates Goodman in his era and traces the development of his characteristic insights, now the common wisdom of every radical critique of American society. A poet and novelist famous in his day for books on decentralization, community planning, psychotherapy, education, linguistics, and media, nowhere is Goodman’s voice more prescient and still relevant than in New Reformation.

“As this decade in America careens, recoils, and shrieks along, Paul Goodman appears increasingly as our most exemplary intellectual, that is, the most deeply representative and the most worthy one.”

“Goodman’s frightening brilliance and integrity scared people, for his was the honesty of the moral man who saw things and connections with clarity that others did not even know were there. Writers and thinkers have a vogue. They are in fashion or forgotten. If Goodman is forgotten, if his work is found only in ash heaps, it is where humanity will end up.”

“His pleading, sane, frank, troubled and by now tired voice is one of the truest and wisest in American life.”

About Michael C. Fisher (Introduction): In his probing introduction to New Reformation, cultural and intellectual historian Michael C. Fisher speaks for a new generation of young scholars still in their twenties, as he assesses the initial impact and continuing relevance of Goodman’s problematic love affair with the radical youth of the Sixties. Fisher wrote his honors thesis on Goodman as an undergraduate at the University California at Davis, and is currently in his second year of doctoral studies in history at the University of Rochester.

See and hear book reviews, and other news on the Author’s Page HERE