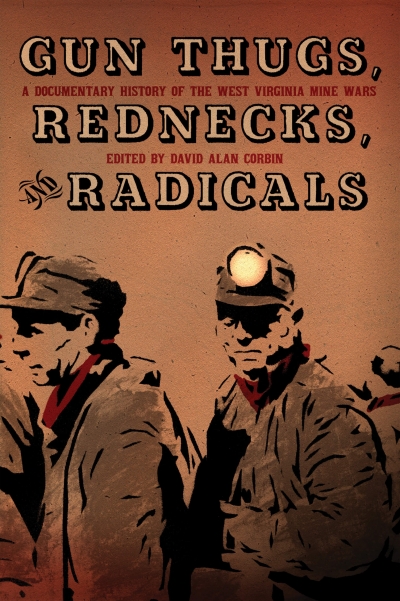 Gun Thugs, Rednecks, and Radicals: A Documentary History of the West Virginia Mine Wars

The dramatic stories of union battles as seen by the leaders, rank-and-file participants, and the journalists who came to West Virginia to cover them.

Strikes and union battles occurred throughout American industry during the early part of the twentieth century, but none of these stories compare to the West Virginia Mine Wars of 1912 and 1921. These two workers’ rebellions quickly drew national attention to an area known principally for its “black gold,” the coal that was vital for U.S. factories, power plants, and warships of that age.

In 1912, miners struck against the harsh conditions in the work camps of Paint and Cabin Creeks and coal operators responded with force. The ensuing battles caused the West Virginia governor to declare martial law, prompting Samuel Gompers to dub the state “Russianized West Virginia [where] the people can be naught but serfs.”

There was little improvement in working conditions by 1921, when another army—thousands of union miners—went up against similar numbers of state police, local deputies, and paid company guards. The weeklong Battle of Blair Mountain ended only after President Warren Harding sent 2,000 U.S. troops and a small unit of bombers to pacify the region.

Gun Thugs, Rednecks, and Radicals tells the story of these union battles as seen by the leaders, rank-and-file participants, and the journalists who came to West Virginia to cover them for papers including The Nation and the New York Times.

Union leaders like Gompers, Frank Keeney, Fred Mooney, Bill Blizzard, and Mother Jones discuss the lives and struggles of the miners for their union. The book also contains articles, speeches, and personal testimony heard by two U.S. Senate committees sent to investigate West Virginia’s labor problems. In this testimony, miners and their family members describe life and work in the coal camps, telling why they participated in these violent episodes in West Virginia history.

Special attention is given to the role of Huntington’s own radical newspaper, The Socialist and Labor Star, a forgotten monument in the history of American heresy and radicalism.

Dr. David A. Corbin, a native West Virginian, received his AB and MA degrees in history from Marshall University, and his PhD from the University of Maryland. He has taught history at the University of Maryland and has published extensively on West Virginia coal miners, including Life, Work, and Rebellion in the Coal Fields (U. of Illinois). Dr. Corbin has received state, regional, and national awards for his writings on coal mining history, and has appeared on public television, C-Span, and in documentary films discussing the history of West Virginia coal miners.