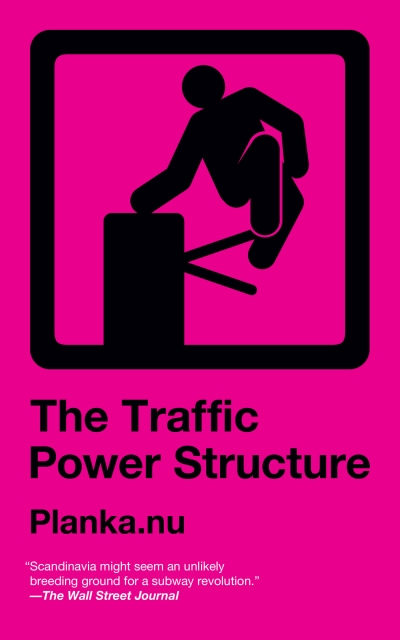 The modern traffic system is ecologically unsustainable, emotionally stressful, and poses a physical threat to individuals and communities alike. Traffic is not only an ecological and social problem but also a political one. Modern traffic reproduces the rule of the state and capital and is closely linked to class society. It is a problem of power. At its core lies the notion of “automobility,” a contradictory ideal of free movement closely linked to a tight web of regulations and control mechanisms. This is the main thesis of the manifesto The Traffic Power Structure, penned by the Sweden-based activist network Planka.nu.

Planka.nu was founded in 2001 to fight for free public transport. Thanks to creative direct action, witty public interventions, and thought-provoking statements, the network has become a leading voice in Scandinavian debates on traffic. In its manifesto, Planka.nu presents a critique of the automobile society, analyzes the connections between traffic, the environment, and class, and outlines its political vision. The topics explored along the way include Bruce Springsteen, high-speed trains, nuclear power, the security-industrial complex, happiness research, and volcano eruptions. Planka.nu rejects demands to travel ever-longer distances in order to satisfy our most basic needs while we lose all sense for proximity and community. The Traffic Power Structure argues for a different kind of traffic in a different kind of world.

The book has received several awards in Sweden and has been hailed by Swedish media as a “manifesto of striking analytical depth, based on profound knowledge and a will to agitation that demands our respect” (Ny Tid).

Planka.nu is a network of local organizations fighting for free public transport. It was founded in 2001 in Stockholm, Sweden, by activists from Sweden’s Syndicalist Youth Association. Apart from engaging in public debate, direct action, and guerrilla media, the network administers the “P-kassa,” a solidarity fund covering fines for people commonly known as fare-dodgers, although they are more aptly described as passengers in public transport engaged in an anti-fare strike.