View basket “Setting Sights: Histories and Reflections on Community Armed Self-Defense” has been added to your basket. 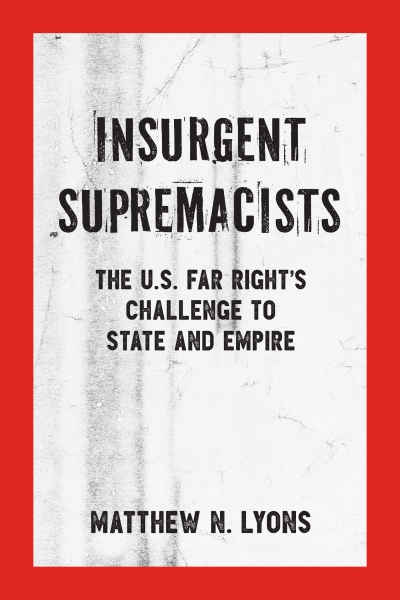 – The U.S. Far Right’s Challenge to State and Empire

by Matthew N. Lyons
This book takes readers on a tour of neonazis and Christian theocrats, by way of the patriot movement, the LaRouchites, and the alt-right.

A major study of movements that strive to overthrow the U.S. government, that often claim to be anti-imperialist and sometimes even anti-capitalist yet also consciously promote inequality, hierarchy, and domination, generally along explicitly racist, sexist, and homophobic lines. Revolutionaries of the far right: insurgent supremacists.

In this book, Matthew N. Lyons takes readers on a tour of neonazis and Christian theocrats, by way of the patriot movement, the LaRouchites, and the alt-right. Supplementing this, thematic sections explore specific dimensions of far-right politics, regarding gender, decentralism, and anti-imperialism.

Intervening directly in debates within left and antifascist movements, Lyons examines both the widespread use and abuse of the term “fascism,” and the relationship between federal security forces and the paramilitary right. His final chapter offers a preliminary analysis of the Trump presidential administration relationship with far-right politics and the organized far right’s shifting responses to it.

Both for its analysis and as a guide to our opponents, Insurgent Supremacists promises to be a powerful tool in organizing to resist the forces at the cutting edge of reaction today.

About the Author:
Matthew N. Lyons has been writing about right-wing politics for over 25 years. His work focuses on the interplay between right-wing movements and systems of oppression, and responses to these movements by leftists, liberals, and the state. He writes regularly for Three Way Fight, a radical antifascist blog, and his work has also appeared in the Guardian, New Politics, Socialism and Democracy, teleSUR, Upping the Anti, and other publications.

Lyons contributed the title essay to the book Ctrl-Alt-Delete: An Antifascist Report on the Alternative Right (Kersplebedeb Publishing, 2017). He is coauthor with Chip Berlet of Right-Wing Populism in America (Guilford Press, 2000) and author of Arier, Patriarchen, Übermenschen: die extreme Rechte in den USA (Aryans, Patriarchs, Supermen: The Far Right in the USA [Unrast Verlag, 2015]).