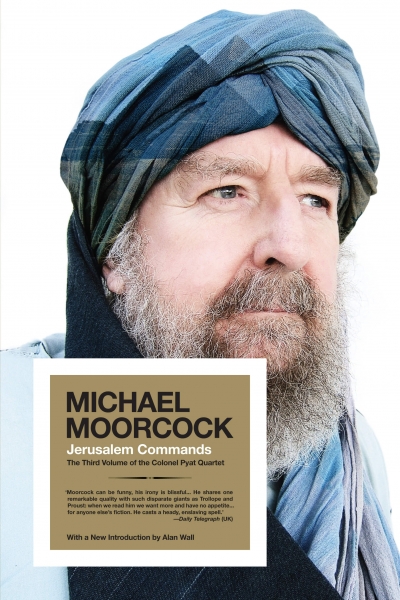 Jerusalem Commands: The Third Volume of the Colonel Pyat Quartet

In Jerusalem Commands, volume three of the Pyat Quartet, our hero schemes and fantasises his way around the world, leaving a trail of mechanical and human wreckage in his wake.

”I will admit I was lured into temptation during the twenties and thirties, and I blame no one for what happened then, least of all myself.”

Unmistakably, this is the voice of Colonel Pyat, addict, inventor, and bizarre Everyman for the twentieth century. In Jerusalem Commands, the third of the Pyat quartet, our hero schemes and fantasises his way from New York to Hollywood, from Cairo to Marrakech, from cult success to the utter limits of sexual degradation, leaving a trail of mechanical and human wreckage in his wake as he crashes towards an inevitable appointment with the worst nightmare this century has to offer.

It is Michael Moorcock’s extraordinary achievement to convert the life of Maxim Pyatnitski into epic and often hilariously comic adventure. Sustained by his dreams and profligate inventions, his determination to turn his back on the realities of his own origins, Pyat runs from crisis to crisis, every ruse a further link in a vast chain of deceit, suppression, betrayal. Yet, in his deranged self-deception, his monumentally distorted vision, this thoroughly unreliable narrator becomes a lens for focusing, through the dimensions of wild farce and chilling terror, on an uneasy brand of truth.

Born in London in 1939, Michael Moorcock now lives in Texas and Paris, France. A prolific and award-winning writer with more than eighty works of fiction and nonfiction to his name, he is the creator of Elric, Jerry Cornelius, and Colonel Pyat amongst many other memorable characters.

Alan Wall is a novelist, short story writer, poet, and essayist. His novels include Bless the Thief, The Lightning Cage, The School of Night, China, and Sylvie’s Riddle. He is currently Professor of Writing and Literature at the University of Chester.