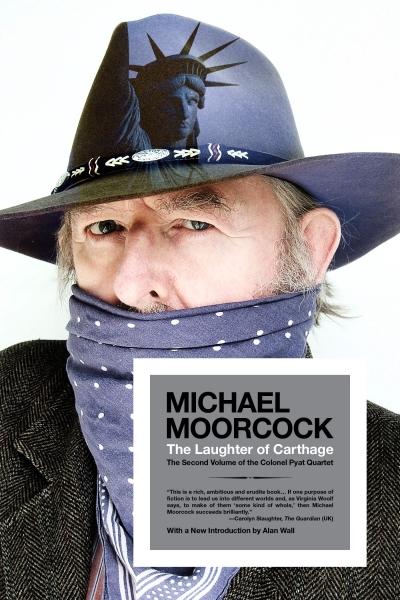 The Laughter of Carthage: The Second Volume of the Colonel Pyat Quartet

Maxim Arturovitch Pyatnitski (Colonel Pyat), that charming but despicable mythomaniac who first appeared in Byzantium Endures, is back leaping from crisis to crisis throughout Europe and the U.S.

Maxim Arturovitch Pyatnitski, that charming but despicable mythomaniac who first appeared in Byzantium Endures, is back. Having fled Bolshevik Russia in late 1919, Pyat’s progress is a series of leaps from crisis to crisis, as he begins affairs with a Baroness and a Greek prostitute while undertaking schemes to build flying machines in Europe and the United States. His devotion to flamboyantly racist, particularly anti-Semitic doctrines—like his devotion to cocaine—remains unabated, and he both sings the praises of Mussolini and lectures across America for the Ku Klux Klan. (His best kept secret is of course, the fact that he is Jewish.) As the novel ends, Pyat is in Hollywood—his new Byzantium—hobnobbing with movie stars and dreaming of making films like those of his hero, D.W. Griffith.

Engineer, braggart, addict, Pyat is a magnificent invention, a genius of innocent vituperation: his finest achievement (and that of the author) is that his own warped and deluded vision is powerful enough to redefine reality. This authoritative edition presents the first time this work has been available in paperback in the U.S., along with a new introduction by Alan Wall.

About Michael Moorcock:
Born in London in 1939, Michael Moorcock now lives in Bastrop, Texas and Paris, France. A prolific and award-winning writer with more than eighty works of fiction and nonfiction to his name, he is the creator of Elric, Jerry Cornelius, and Colonel Pyat amongst many other memorable characters.

About Alan Wall (introduction):
Alan Wall is a novelist, short story writer, poet and essayist. His novels include Bless the Thief, The Lightning Cage, The School of Night, China, and Sylvie’s Riddle. He is currently Professor of Writing and Literature at the University of Chester.