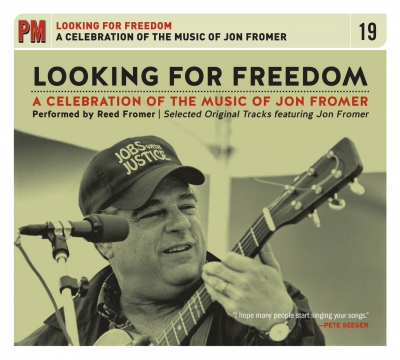 A Celebration of the Music of Jon Fromer
Jon and Reed Fromer
This CD is a tribute to the San Francisco folk/blues artist whose soulful singing style and original songs about work, love, struggle, and triumph helped fuel movements for peace, human rights, and social justice.

Looking for Freedom: A Celebration of the Music of Jon Fromer is a tribute to the San Francisco folk/blues artist whose soulful singing style and original songs about work, love, struggle, and triumph helped fuel movements for peace, human rights, and social justice for nearly fifty years.

From marching in Selma in 1965 to his final journey to the School of the Americas Watch protest in late 2012, Jon Fromer (1946–2013) lent constant musical support to people’s efforts to build more free, just, and peaceful societies. He performed to devoted fans in packed concert halls across the U.S. and in Europe—but was always most at home leading the singing contingent of a rally, a march, or a picket line.

Looking for Freedom showcases thirteen of Jon Fromer’s songs—a combination of his most beloved signature pieces and some previously unrecorded material—performed and produced by his nephew and longtime accompanist Reed Fromer.

Fan favorites include “My Feet Are Tired,” a rousing tribute to Rosa Parks and the Montgomery Bus Boycott, “Bessie,” a recounting of the tragic fate of blues legend Bessie Smith, and “Harvest of My Soul,” Jon’s last completed song, which invokes one’s magnified appreciation of the joys of life when time becomes a more precious commodity.

Also included are four archival recordings of Jon himself, including two selections from his live concert CD, We Do the Work. The final song is Jon’s own rendition of “Harvest of My Soul,” recorded just five days before he died.

About Jon Fromer:
Throughout his life, Jon Fromer (1946–2013) personified the idea of putting one’s artistic talent to use toward the goal of creating a better world. He was a driving force behind numerous progressive musical endeavors and organizations, including the Freedom Song Network, the Western Workers’ Labor Heritage Festival, Encuentro del Canto Popular, and the annual mass demonstration of over twenty thousand protesters outside the infamous military training project School of the Americas in Ft. Benning, Georgia.

His recordings include the live concert CD We Do the Work (1998) and the studio album Gonna Take Us All (2008). He also led a Freedom Song Network chorus in recording This Line is Singing (1991), a rousing collection of union songs.

About Reed Fromer:
Reed Fromer’s active involvement in music dates back to his days as a youth performer on the TV shows Git Box and Just Kidding, both created by his uncle, Jon Fromer. In addition to accompanying Jon for over 35 years and producing Jon’s Gonna Take Us All CD, Reed has led one of Northern California’s most powerful R&B bands for nearly 30 years, is an award-winning songwriter (with material covered by Gregg Allman, among others), accompanies gospel choirs and Motown revue acts, directs the Night Choir on Elm Street adult chorus, and has instilled a love of pop and folk music in thousands of children through his chorus classes in schools and recreation programs. He was a recipient of the Marin County Human Rights Commission’s 1994 Martin Luther King, Jr. Award for his educational work on civil rights, and recently completed his first novel, a parable about institutional racism and affirmative action.