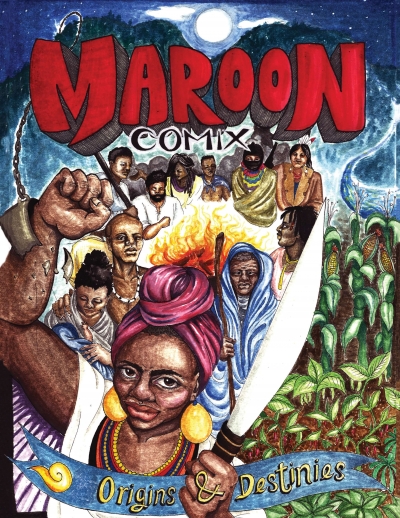 Editor: Quincy Saul • Illustrators: Seth Tobocman, Mac McGill, and Songe Riddle
A fire on the mountain where maroon words and images meet to tell stories together.

Escaping slavery in the Americas, maroons made miracles in the mountains, summoned new societies in the swamps, and forged new freedoms in the forests. They didn’t just escape and steal from plantations—they also planted and harvested polycultures. They not only fought slavery but proved its opposite, and for generations they defended it with blood and brilliance.

Maroon Comix is a fire on the mountain where maroon words and images meet to tell stories together. Stories of escape and homecoming, exile and belonging. Stories that converge on the summits of the human spirit, where the most dreadful degradation is overcome by the most daring dignity. Stories of the damned who consecrate their own salvation.

With selections and citations from the writings of Russell Maroon Shoatz, Herbert Aptheker, C.L.R. James, and many more, accompanied by comics and illustrations from Songe Riddle, Mac McGill, Seth Tobocman, and others, Maroon Comix is an invitation to never go back, to join hands and hearts across space and time with the maroons and the mountains that await their return.