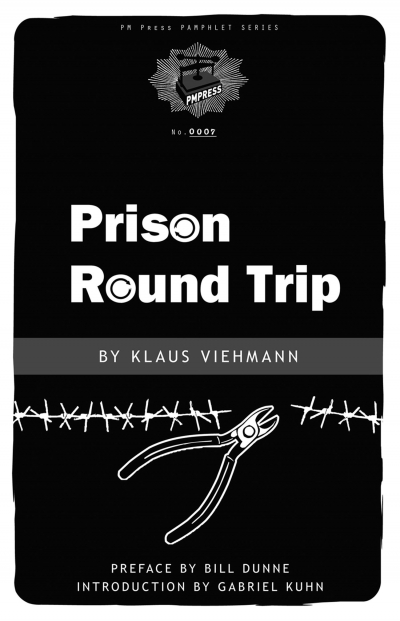 Prison Round Trip is a reflection on prison life and how to keep one’s sanity and political integrity behind bars.

Bang. The door to your cell is shut. You have survived the arrest, you are mad that you weren’t more careful, you worry that they will get others too, you wonder what will happen to your group and whether a lawyer has been called yet–of course you show none of this. The weapon, the fake papers, your own clothes, all gone. The prison garb and the shoes they’ve thrown at you are too big–maybe because they want to play silly games with you, maybe because they really blow “terrorists” out of proportion in their minds–and the control over your own appearance taken out of your hands. You look around, trying to get an understanding of where you’ll spend the next few years of your life.

Prison Round Trip was first published in German in 2003 as “Einmal Knast und zurück.” The essay’s author, Klaus Viehmann, had been released from prison ten years earlier, after completing a 15-year sentence for his involvement in urban guerilla activities in Germany in the 1970s. The essay was subsequently reprinted in various forums. It is a reflection on prison life and on how to keep one’s sanity and political integrity within the hostile and oppressive prison environment; “survival strategies” are its central theme.

“Einmal Knast und zurück” soon found an audience extending beyond Germany’s borders. Thanks to translations by comrades and radical distribution networks, it has since been eagerly discussed amongst political prisoners from Spain to Greece. This is the first time the text is available to a wider English-speaking audience.

“Klaus’s take on survival strategy tells us we can not only survive thusly but can as well continue to serve the cause of liberation—which are really the same thing. We can be captured without giving in or giving up.” –From the Preface by North American political prisoner Bill Dunne

Klaus Viehmann spent fifteen years in West German prisons after his arrest in 1978 for various activities carried out by the anarchist 2nd of June Movement. While in prison he wrote an essay that became the centerpiece of the book Drei zu Eins (“Three to One”), published in 1991. The book introduced the concept of “triple oppression”–the interrelations between class, gender and race in oppressive social structures–to a radical German-speaking audience, and proved highly influential, especially in autonomist circles. Since his release Viehmann has been active in various left-wing projects, including solidarity campaigns for World War II forced laborers and Colombian trade unionists. He remains involved in numerous publishing activities, as an author, translator, and a graphic designer. He is also co-editor of two extensive volumes documenting the history of autonomist political poster art in Germany: Hoch die Kampf Dem (1999) and Vorwärts bis zum Nieder Mit (2001). His home is once again Berlin–today officially undivided, but, as he puts it, “a place where a lot needs to be done.”