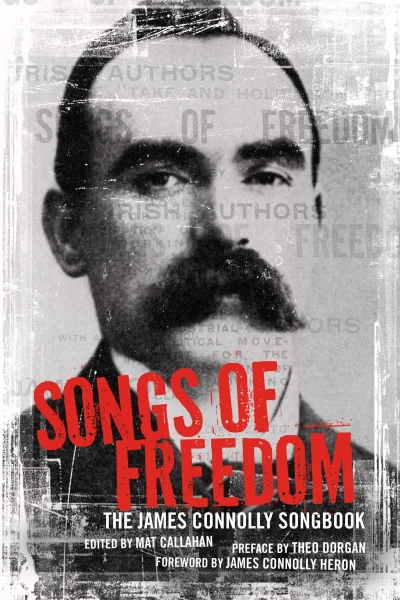 Songs of Freedom is a celebration of the life and work of James Connolly, the Irish revolutionary socialist. It is at once a collection of stirring revolutionary songs and a vital history.

Songs of Freedom is the name of the songbook edited by James Connolly and published in 1907. Connolly’s introduction is better known than the collection for which it was written, containing his oft-quoted maxim: “Until the movement is marked by the joyous, defiant singing of revolutionary songs, it lacks one of the most distinctive marks of a popular revolutionary movement, it is the dogma of a few and not the faith of the multitude.” Though most of the songs were of Irish derivation, the songbook itself was published in New York and directed to the American working class, explicitly internationalist in its aims.

Songs of Freedom is a celebration of the life and work of James Connolly, the Irish revolutionary socialist martyred by the British government for his role in the Easter Rising of 1916. It is at once a collection of stirring revolutionary songs and a vital historical document. For the first time in a hundred years, readers will find the original Songs of Freedom as well as the 1919 Connolly Souvenir program published in Dublin for a concert commemorating Connolly’s birth. Both are reproduced exactly as they originally appeared, providing a fascinating glimpse of the workers’ struggle at the beginning of the last century. To complete the picture is included the James Connolly Songbook of 1972, which contains not only the most complete selection of Connolly’s lyrics, but also historical background essential to understanding the context in which the songs were written and performed.

“My grand aunt Nora Connolly, in her book We Shall Rise Again, said of rebel songs: ‘For more may be remembered of a country’s history and treasured deep in the heart of a people through a song or a poem than through the pages of a history book’—how true. It was Nora who taught singers her father’s songs. ‘After 1916,’ she said, ‘I never did any more singing’—how sad. Now with this project and through the great talent and commitment of all involved we can hear Nora sing again.”
—James Connolly Heron, great-grandson of James Connolly and author of The Words of James Connolly

James Connolly (1868-1916) was an Irish republican and socialist leader. He was executed by a British firing squad because of his leadership role in the Easter Rising of 1916. Connolly was the author of many books and articles, becoming one of the leading revolutionary theorists of his time. At the head of the Irish Citizen Army, Connolly’s vision and determination proved decisive in launching the rising which proclaimed the Irish Republic from the steps of Dublin’s General Post Office. This set in motion the sequence of events that would unleash the Irish War of Independence (1919-1921). While this did lead to 26 of Ireland’s 32 counties becoming independent of the United Kingdom, it left unresolved the question of Irish sovereignty over the entirety of the island. Indeed, it left unresolved the very conflicts Connolly presciently warned against when he wrote: “If you remove the English army tomorrow and hoist the green flag over Dublin castle, unless you set about the organization of the Socialist Republic your efforts would be in vain. England would still rule you.”

Mat Callahan is a musician and author originally from San Francisco, where he founded Komotion International. He is the author of three books, Sex, Death & the Angry Young Man, Testimony, and The Trouble With Music. He currently resides in Bern, Switzerland. http://www.matcallahan.com

Theo Dorgan is a world-renowned poet, prose writer, editor, and translator, originally from Cork, Ireland. He is the recipient of numerous awards including the O’Shaughnessy Award for Irish Poetry. http://www.theodorgan.com/

See and hear author interviews, book reviews, and other news on the Author’s Page HERE and Editor’s Page HERE
Click here for one-page information sheet on this product