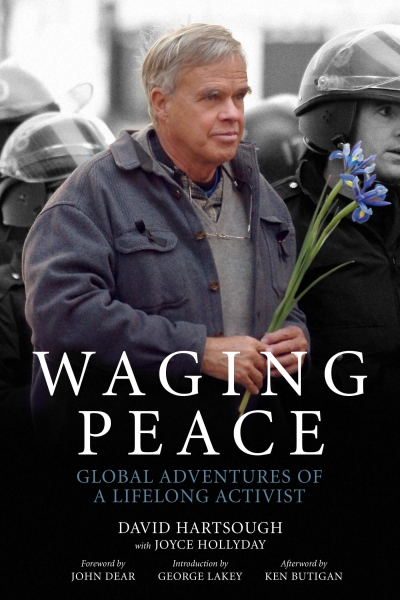 Waging Peace is a testament to the difference one person can make. Hartsoughâs stories inspire, educate, and encourage readers to find ways to work for a more just and peaceful world.

David Hartsough knows how to get in the way. He has used his body to block Navy ships headed for Vietnam and trains loaded with munitions on their way to El Salvador and Nicaragua. He has crossed borders to meet “the enemy” in East Berlin, Castro’s Cuba, and present-day Iran. He has marched with mothers confronting a violent regime in Guatemala and stood with refugees threatened by death squads in the Philippines.

Waging Peace is a testament to the difference one person can make. Hartsough’s stories inspire, educate, and encourage readers to find ways to work for a more just and peaceful world. Inspired by the examples of Mahatma Gandhi and Martin Luther King Jr., Hartsough has spent his life experimenting with the power of active nonviolence. It is the story of one man’s effort to live as though we were all brothers and sisters.

Engaging stories on every page provide a peace activist’s eyewitness account of many of the major historical events of the past sixty years, including the Civil Rights and anti-Vietnam War movements in the United States and the little-known but equally significant nonviolent efforts in the Soviet Union, Kosovo, Palestine, Sri Lanka, and the Philippines.

Hartsough’s story demonstrates the power and effectiveness of organized nonviolent action. But Waging Peace is more than one man’s memoir. Hartsough shows how this struggle is waged all over the world by ordinary people committed to ending the spiral of violence and war.

“Peace will only come when all of us become the change we wish to see in this world. David Hartsough became that change and has spent the best part of sixty years working to bring peace to our troubled world. His book is one that every peace-loving person must read and learn from.”
—Arun Gandhi, president, Gandhi Worldwide Education Institute (grandson of Mahatma Gandhi)

“It has been my privilege to work with David Hartsough over the years and to be arrested and jailed with him for nonviolent civil disobedience. I highly recommend Waging Peace to every American who wishes to live in a world with peace and justice and wants to feel empowered to help create that world.”
—Daniel Ellsberg, Secrets: A Memoir of Vietnam and the Pentagon Papers

“When great events happen, such as the falling of the Berlin Wall, we must never forget that people like David Hartsough and many others have worked hard to prepare the ground for such ‘miracles.’ David’s belief in the goodness of people, the power of love, truth, and forgiveness and his utter commitment to making peace and ending war will inspire all those who read this book.”
—Mairead Maguire, Nobel Peace Prize Laureate, Peace People, Northern Ireland

“David Hartsough has lived an exemplary nonviolent life. Waging Peace highlights the numerous ways he has done this in many troubled parts of the world as well as in the United States.”
—Martin Sheen, actor

“If you want to know what it means to live a ‘life well lived,’ read David Hartsough’s masterful book. It is not only a page turner, but it will probably transform the way you look at your own life—your priorities, your lifestyle, your future.”
—Medea Benjamin, cofounder of Code Pink and Global Exchange

David Hartsough is executive director of Peaceworkers, based in San Francisco, and is cofounder of the Nonviolent Peaceforce. He is a Quaker and member of the San Francisco Friends Meeting. He has a BA from Howard University and an MA in International Relations from Colombia University. Hartsough has been working actively and internationally for nonviolent social change and peaceful resolution of conflicts since he met Dr. Martin Luther King, Jr. in 1956.

Joyce Hollyday is a co-founder and co-pastor of Circle of Mercy, an ecumenical faith community in Asheville, North Carolina. She served for fifteen years as the associate editor of Sojourners magazine, covering stories of faith-based resistance in the United States, Nicaragua, and South Africa. She is the author of several books, including Clothed with the Sun: Biblical Women, Social Justice, and Us and Then Shall Your Light Rise: Spiritual Formation and Social Witness.

John Dear is an internationally known voice for peace and nonviolence. He is a popular speaker, peacemaker, organizer, lecturer, retreat leader, and the author or editor of thirty books, most recently The Nonviolent Life. John was nominated for the Nobel Peace Prize by Archbishop Desmond Tutu and lives in Northern New Mexico.

George Lakey is a visiting professor of Peace and Conflict Studies at Swarthmore College and was recently named Peace Educator of the Year by the Peace and Conflict Studies Association. Lakey is author of Toward a Living Revolution and Facilitating Group Learning: Strategies for Success with Adult Learners. George writes a weekly column, “Living Revolution,” in Waging Nonviolence: People Powered News and Analysis.

Ken Butigan is an educator, writer, and advocate for nonviolent change. For three decades he has participated in or organized numerous movements for social transformation. He is the director of Pace e Bene Nonviolence Service and teaches in the Peace, Justice and Conflict Studies Program at DePaul University in Chicago.