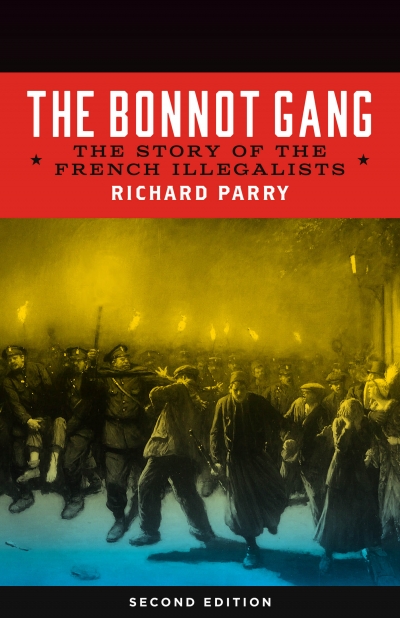 The Story of the French Illegalists (2nd edition)
by Richard Parry
The Bonnot Gang were the most notorious French anarchists ever; and as bank expropriators the inventors of the motorized getaway. It is the story of how the anarchist taste for illegality developed into illegalism.

This is the story of the infamous Bonnot Gang: the most notorious French anarchists ever, and as bank expropriators the inventors of the motorized “getaway.” It is the story of how the anarchist taste for illegality developed into illegalism—the theory that theft is liberating in itself. And how a number of young anarchists met in Paris in the years before the First World War, determined to live their lives to the full, regardless of the consequences.

Paris in 1911 was a city of riots, strikes, and savage repression of the working class. A stronghold of foreign exiles and homegrown revolutionaries, it was also the base of l’anarchie, the outspoken individualist weekly. L’anarchie drew together people for whom crime and revolution went hand in hand. There was Victor Kibalchich (later known as Victor Serge), whose inflammatory articles would put him on trial with the rest. Then there was the gang itself: Victor’s childhood friend Raymond-La-Science, the tuberculous André Soudy, the serious-minded René Valet, Simentoff the southerner, and lastly the prime motivators of the group—the remorseless Octave Garnier and the experienced Jules Bonnot. Their robberies, daring and violent, would give them a lasting notoriety in France. Their deaths, as spectacular as their lives, would make them a legend among revolutionaries the world over.

Extensively researched and fully illustrated with rare period photos, drawings, and maps, this updated edition is the best account of the Bonnot Gang to appear in any language.

“The first book on the subject in English, and one based on original research in the various libraries and collections in Paris, Amsterdam, and London. . . . Although the book is written as a history, the style is journalistic rather than stuffily academic, and paced so that the narrative gets progressively more exciting. All in all, this is that rare book indeed. It is a good read and action-packed; but also meticulously researched with an impressive attention to detail.”
—New Anarchist Review

“Although Parry does not try to romanticize the protagonists, the conclusion of the book does try to interpret their story as a political event arising out of the class struggle. . . . It will be widely read; it ought to be widely discussed.”
—Nicholas Walter in Freedom

“The book is original, almost naively frank, and instantly likeable. It requires no prior knowledge and although it describes itself as a ‘history,’ it often reads more like a novel. All told this is a great introduction to the subject and well worth the read.”
—Katy Armstrong-Myers in Socialist Lawyer

“Parry neither idealizes nor condemns the Bonnot Gang. Instead, he is trying to situate its activities in an ideological tradition and, at least as importantly, in the unforgiving class contradictions characterizing French society at the time.”
—Ulf Gyllenhak in Dagens Nyheter

Richard Parry studied medieval and modern history at University College London and took a masters in European Social History at the London School of Economics. He subsequently became a leading human rights lawyer who specialised in defending protestors. He continues to live and practise criminal defence law in London, his native city.