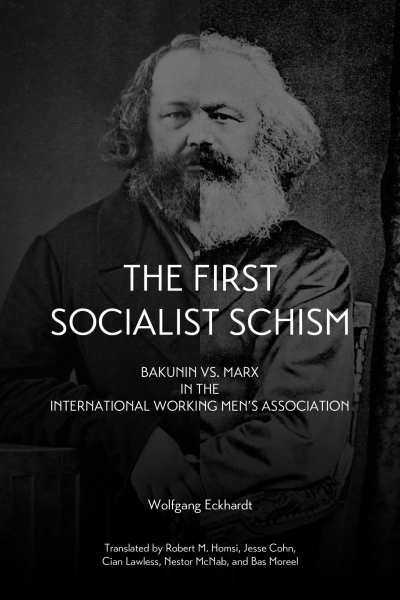 Bakunin vs. Marx in the International Working Men’s Association
by Wolfgang Eckhardt

This book chronicles the conflicts in the International Working Men’s Association (First International) using source material from numerous archives and libraries that have gone unnoticed or were completely unknown.

The First Socialist Schism chronicles the conflicts in the International Working Men’s Association (the First International, 1864–1877), which represents an important milestone in the history of political ideas and socialist theory. In defending their autonomy, federations in the International became aware of what separated them from the social democratic movement that relied on the establishment of national labor parties and the conquest of political power. This can be seen as a decisive moment in the history of political ideas: the split between centralist party politics and the federalist grassroots movement. The separate movements in the International—which would later develop into social democracy, communism, and anarchism—found their greatest advocates in Mikhail Bakunin and Karl Marx. However, the significance of this alleged clash of titans is largely a modern invention. It was not the rivalry between two arch-enemies or a personal vendetta based on mutual resentment that made the conflict between Bakunin and Marx so important but rather that it heralded the first socialist schism between parliamentary party politics aiming to conquer political power and social-revolutionary concepts.

Instead of focusing exclusively on what Marx and Bakunin said, many other contributions to this debate are examined, making this the first reconstruction of a dispute that gripped the entire organization. This book also provides the first detailed account of the International’s Congress of The Hague (September, 1872); including the background, the sequence of events, and international reaction. The book sets new standards when it comes to source material, taking into account documents from numerous archives and libraries that have previously gone unnoticed or were completely unknown.

Wolfgang Eckhardt, who works for the Library of the Free (Bibliothek der Freien) in Berlin, has been actively researching anarchism since the 1990s. His publications include the German-language Bakunin Ausgewählte Schriften (Selected Works) series, of which six volumes have been published so far under his editorship (1995–2011).