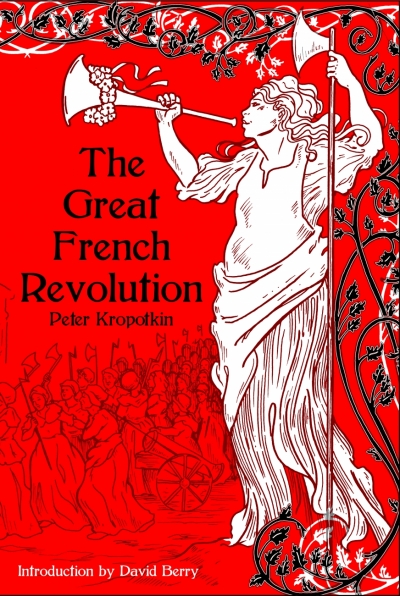 Kropotkin’s most substantial historical work, with an introduction from David Berry and afterword from Iain McKay.

The Great French Revolution, 1789–1793 is Peter Kropotkin’s most substantial historical work. In it he presents a people’s history of the world-shaking events of the Revolution and shows the key role the working men and women of the towns and countryside played in it. Without the constant pressure of popular organisations and activity, the politicians would never have created a Republic, nor been able to survive the counterrevolutionary forces internally or externally.

Focusing on such mass movements—and especially the peasant majority—rather than on the few great men beloved of bourgeois accounts, this is a groundbreaking account of the period and a seminal work of “history from below.” Later research may have corrected some factual details and opened new avenues of scholarship, but Kropotkin’s text remains an exemplar of anarchist history-writing, challenging both bourgeois republican and Marxist interpretations of the Revolution.

Yet it is more than a history: Kropotkin uses the experience of the French Revolution to aid us in our current struggles and to learn its lessons in order to ensure the success of future revolutions. This book raises issues which have resurfaced time and again, as well as offering solutions based on the self-activity of the masses, the new, decentralised, directly democratic social organisations they forged during the Revolution, and the need to transform a political revolt into a social revolution which seeks to secure the well-being of all by transforming the economy from the start.