View basket “New Taboos” has been added to your basket. 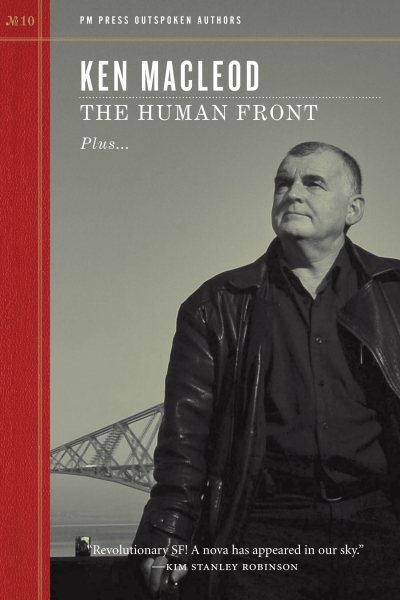 The Human Front follows the adventures of a young Scottish guerrilla, drawn into low-intensity sectarian war in a high-intensity future, when the arrival of an alien intruder calls for new tactics and strange alliances.

Ken MacLeod is one of the brightest and most progressive of Britain’s “Hard SF” stars who navigate exciting new futures to the delight of legions of fans around the world. His works combine cutting-edge scientific speculation, socialist and anarchist themes, and a deeply humanistic vision. Described by fans and adversaries alike as a “techno-utopian socialist,” MacLeod thrusts his characters into uncanny encounters that have included AI singularities, divergent human evolution, and posthuman cyborg-resurrection.

In his novella The Human Front, a young Scottish guerrilla fighter is drawn into low-intensity sectarian war in a high-intensity dystopian future, and the arrival of an alien intruder (complete with saucer!) calls for new tactics and strange alliances. Its companion piece, “Other Deviations,” first published in this edition, reveals the complex origins of MacLeod’s alternate history.

Plus: “The Future Will Happen Here, Too,” in which a Hebridean writer celebrates the landscapes that shaped his work, measures Scotland’s past against humanity’s future, and peers into the eyes of an eel.

And Featuring: our irreverent Outspoken Interview, a candid and often cantankerous conversation that showcases our author’s deep erudition and mordant wit.

Ken MacLeod is one of the brightest and most progressive of Britain’s new “Hard SF” stars who are navigating exciting new futures, to the delight of a growing legion of fans around the world. His award-winning works combine cutting-edge scientific speculation, socialist and anarchist themes, and a deep humanistic vision. Described by fans and detractors alike as a “techno-utopian socialist,” MacLeod delights in engaging recognizable characters in far-flung adventures across the boundaries of space and time.

Born in Scotland’s legendary Outer Isles, MacLeod graduated from Glasgow University with a degree in zoology and has worked as a computer programmer and written a masters thesis on biomechanics. A regular in British SF and progressive circles, he is married and has two children. He lives in South Queensferry, Scotland.