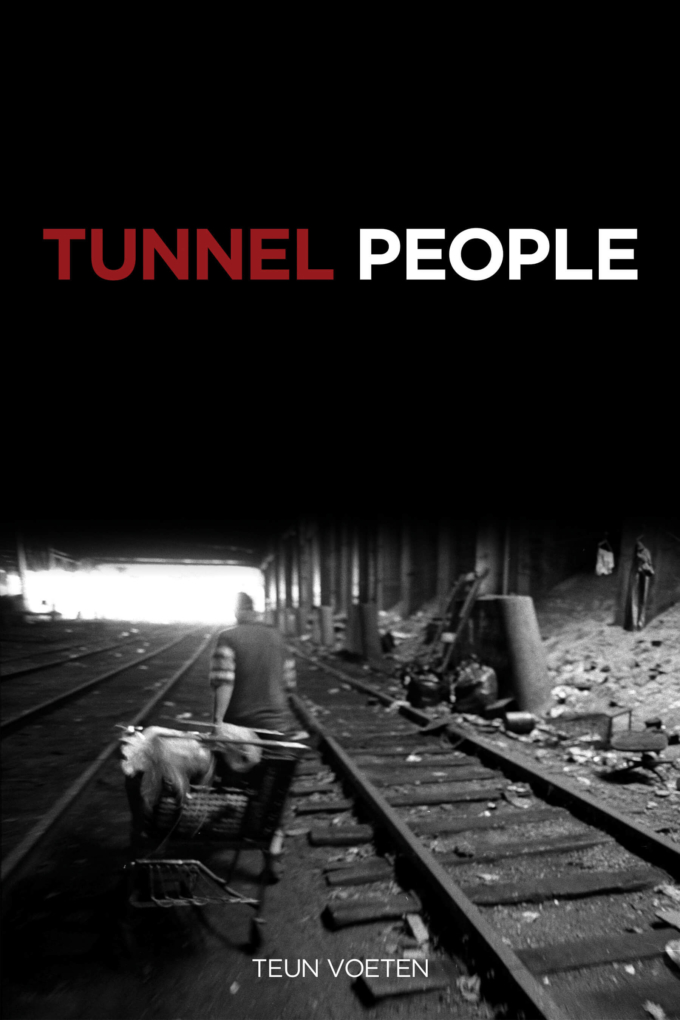 By the end of the millennium, thousands of homeless people roamed the streets of Manhattan. A small group of them went underground. Invisible to society, they managed to start a new life in the tunnel systems of the city.

At the end of the millennium, thousands of homeless people roamed the streets of Manhattan. A small group of them went underground. Invisible to society, they managed to start a new life in the tunnel systems of the city.

Acclaimed war photographer and cultural anthropologist Teun Voeten gained unprecedented access to this netherworld. For five months in 1994 and 1995 he lived, slept and worked in the tunnel. With him, we meet Vietnam veterans, macrobiotic hippies, crack addicts, Cuban refugees, convicted killers, computer programmers, philosophical recluses and criminal runaways. Voeten describes their daily work, problems and pleasures with humor and compassion. He also witnessed the end of tunnel life. The tunnel people were evicted in 1996, but Amtrak and homeless organizations offered them alternative housing.

Some succeeded in starting again above ground, while others failed. In this updated version of the book, Voeten tracks down the original tunnel dwellers and describes what has happened in the thirteen years since they left the tunnels.

“Teun Voeten has found yet another frontier in the great American experiment – the one underground, in the tunnels of Manhattan – and delivered it to us in an utterly charming and fascinating account. Part anthropologist and part journalist, Voeten dwells in a unknown world that most of us simply pass by in a hurry. To fully know America, one most follow Voeten into her depths. There is much there to admire and, yes, to learn from.”
–Sebastian Junger, War Reporter and author of The Perfect Storm.

“This book is so brilliant because it’s written from the perspective of an insider, from someone who actually lived in the tunnel they are writing about, someone who actually spent time in the darkness, scavenged for food out of the garbage and literally slipped between the cracks in the pavement and into a place of true invisibility. Veoten is not someone who just poked his head in and squeaked, “hello?” into the darkness.”
–Marc Singer, maker of the award winning documentary Dark Days.

“Finally, after countless portrayals of one of the most highly publicized existences, Voeten is to be commended for his honest and explicit view of New York’s underworld. I salute his efforts and sacrifices to the highest. ”
–Bernard Monte Isaac aka Lord of the Tunnel, former tunnel resident.

“Voeten is no doubt one of the most adventurous reporters in the Netherlands.”
—Vrij Nederland Magazine

“Voeten resists the temptation to sensationalize and romanticize the underground tunnel people. Nor is his book sentimental…[it is a ] sober and well-written report about the mean misery underground: That makes this book so powerful.”
—Volkskrant

“Tunnel People is a supreme example of participatory observation. The insider’s point of view comes here to full light in a brilliant way. It is not an objective case-study, but a subjective, journalistic reportage, right to the point of an incredible dynamic, human underworld that is nowhere being sensationalized nor romanticized by Voeten…”
—Passage

His work has been published in Vanity Fair, Newsweek, The New Yorker, and National Geographic among others. Voeten is a contributing photographer for organizations such as the International Red Cross, Doctors without Borders, Human Rights Watch and the United Nations. He has published three books in the Netherlands: Tunnel People, an journalistic/anthropological account of 5 months living in an underground community of homeless in New York; A Ticket To, a collection of Voeten’s hard hitting war photography along with a much cited essay on war photography; and in 1998, Voeten went to Sierra Leone to work on a project on child soldiers. His first trip nearly ended in disaster when he was hunted down by rebels intent on killing him, but eventually resulted in the headline How de Body? Hope and Horror in Sierra Leone, published by Meulenhoff, Amsterdam in 2000. The English translation was published by St. Martins Press, New York, in 2002.