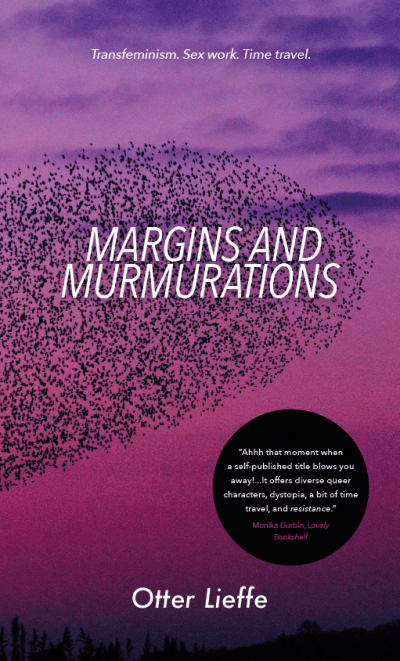 After the economic crises of the 2020s, a corner of Europe known only as the State has become a monoculture of gender, sexuality, ability and race. Forced to leave their home, Ash and Pinar, elder leaders of the Resistance, have made a new, quieter life in the forest.

But nothing lasts forever.

These best friends answer the calls of the past – and the future – to rejoin their community and face their oppressors head on. As a movement, they organise for dignity and self-determination. Together, they fight to survive.

Written by a trans woman and sex worker, Margins and Murmurations puts transgender, sex work and femininity at the centre of its twisting, multi-layered narrative. In this sensitive exploration of exclusion, intimacy and control, Otter Lieffe calls us to renew our struggles against oppression and to proudly reclaim the margins that so many of us call home.

“Imagine you had the ability to move through your own life, to revisit your past and foresee your future. Which events would you long to remember and which would you forget? Would you want to know what the future holds?

This is the story of Ash, a trans woman and healer living in a corner of Europe controlled by a militarized state. Amidst the economic crash of the 2020s, this land, once a hub of diversity, saw the rise of a state-imposed monoculture of gender, sexuality, ability and race. Those that didn’t fit, known as the divergents, were imprisoned, expelled or worse.

Ash and her best friend Pinar long ago escaped the City, left behind their days of fighting State oppression, and are eking out a calmer life in the forest, ravaged by the effects of climate change. One day, Jason, a resistance fighter, arrives abruptly into their life, reigniting personal and political drives and they find themselves drawn back into the fight.

Joining trans and queer organisers, sex workers and other members of a hidden underclass, they risk everything to return to the City and face their oppressors. In this fight for dignity, self-determination and their survival, Ash’s ability to transcend time, a trait that until now she has considered her curse, turns out to be a more powerful weapon than anyone could have imagined.”