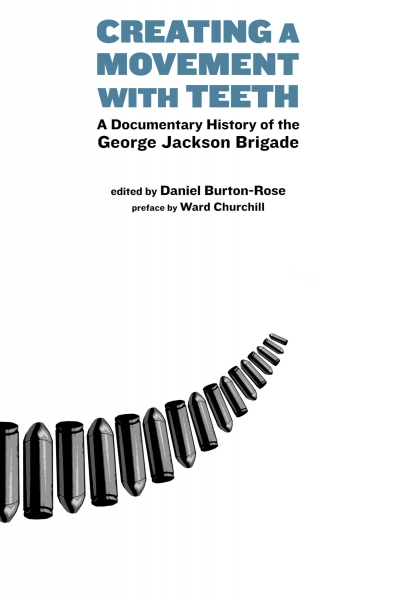 Creating a Movement with Teeth: A Documentary History of the George Jackson Brigade

A powerful illumination of a forgotten chapter of the radical social movements of the 1970s in which diverse interests combined forces in a potent rejection of business as usual in the United States.

Bursting into existence in the Pacific Northwest in 1975, the George Jackson Brigade claimed 14 pipe bombings against corporate and state targets, as many bank robberies, and the daring rescue of a jailed member. Combining veterans of the prisoners’ women’s, gay, and black liberation movements, this organization was also ideologically diverse, consisting of both communists and anarchists. Concomitant with the Brigade’s extensive armed work were prolific public communications. In more than a dozen communiqués and a substantial political statement, they sought to explain their intentions to the public while defying the law enforcement agencies that pursued them.

Creating a Movement with Teeth makes available this body of propaganda and mediations on praxis, collecting it in one volume for the first time. In addition, the collection assembles corporate media profiles of the organization’s members and alternative press articles in which partisans thrash out the heated debates sparked in the progressive community by the eruption of an armed group in their midst. Creating a Movement with Teeth illuminates a forgotten chapter of the radical social movements of the 1970s in which diverse interests combined forces in a potent rejection of business as usual in the United States.

“Creating a Movement with Teeth is an important contribution to the growing body of literature on armed struggle in the 1970s. It gets us closer to knowing not only how pervasive militant challenges to the system were, but also the issues and contexts that shaped such strategies. Through documents by and about the George Jackson Brigade, as well as the introduction by Daniel Burton-Rose, this book sheds light on events that have until now been far too obscured.”

âDan Berger, author of Outlaws of America: The Weather Underground and the Politics of Solidarity; editor The Hidden 1970s: Histories of Radicalism.

“Daniel Burton-Rose’s documentary history of the George Jackson Brigade offers the reader a rare first-hand account of a militant movement’s attempt to communicate and refine the intent of its actions. The volume focuses on the 1970s, when revolution seemed imminent to those engaged in ‘the struggle.’ It contains a marvelous array of surveillance reports, feature articles in mainstream newspapers, on-the-spot communiqués directed both to the Brigade’s constituency on the Left and to the impacted public, and many print volleys between the groups on the subject of violence. Suddenly this hidden history comes alive, nuanced, open to interpretation with the actual documents in hand. Burton-Rose’s helpful annotations and his thoughtful retrospective interview with several of the members of the group underscores his deep understanding of the period, the people, and the issues that remain compelling as revealed by the mix of remorse, self-criticism, as well as consistent conviction. The Brigade’s use of international and historical revolutionaries as points of reference, also makes this book an valuable resource for a wide range of issue relevant to studies of the past, present, and sadly, the future.”

“The popular image of the ’70s urban guerrilla, even on the left, is that of the student radical or New Left youth activist kicking it up a couple of notches. Daniel Burton-Rose’s documentary history of the George Jackson Brigade is an important corrective in this regard. The Brigade, rooted in prison work, white and black, straights, bisexuals and dykes, was as rich a mixture of the elements making up the left as one could perhaps hope for. We all have much to learn form the Brigade’s rich and unique history.”

“A deep dig into the victories and errors of this important yet often overlooked revolutionary group. ‘Information a hundred times more powerful than any bomb.'”

Daniel Burton-Rose (Editor) is the author of Guerrilla USA: The George Jackson Brigade and the Anti-capitalist Underground of the 1970s and the co-editor of Confronting Capitalism: Dispatches from a Global Movement, and The Celling of America: An Inside Look at the U.S. Prison Industry.

Ward Churchill (Preface) is a prolific writer and lecturer, having authored, co-authored, or edited over twenty books. He is a member of the leadership council of Colorado AIM.

Edited by Daniel Burton-Rose with Preface by Ward Churchill