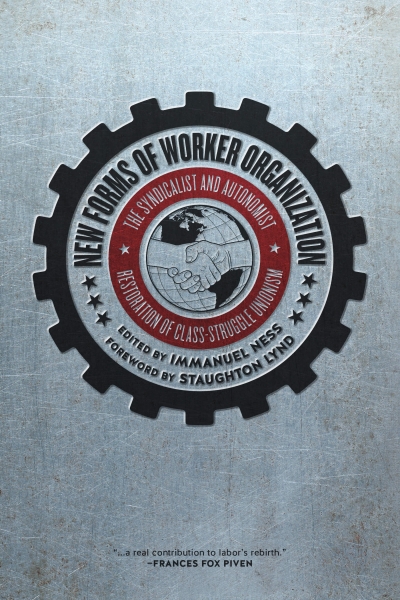 This book documents workers’ struggles within an international scope. The tangible evidence here serves as a handbook for understanding the obstacles and opportunities for workers challenging neoliberal capitalism.

Bureaucratic labor unions are under assault. Most unions have surrendered the achievements of the mid-twentieth century, when the working class was a militant force for change throughout the world. Now trade unions seem incapable of defending, let alone advancing, workers’ interests.

As unions implode and weaken, workers are independently forming their own unions, drawing on the tradition of syndicalism and autonomism—a resurgence of self-directed action that augurs a new period of class struggle throughout the world. In Africa, Asia, the Americas, and Europe, workers are rejecting leaders and forming authentic class-struggle unions rooted in sabotage, direct action, and striking to achieve concrete gains.

This is the first book to compile workers’ struggles on a global basis, examining the formation and expansion of radical unions in the Global South and Global North. The tangible evidence marshaled in this book serves as a handbook for understanding the formidable obstacles and concrete opportunities for workers challenging neoliberal capitalism, even as the unions of the old decline and disappear.

“As the U.S. labor movement conducts its latest, frantic search for ’new ideas,’ there is no better source of radical thinking on improved modes of union functioning than the diverse contributors to this timely collection. New Forms of Worker Organization vividly describes what workers in Africa, Asia, South America, and Europe have done to make their unions more effective. Let’s hope that these compelling case studies of rank-and-file struggle and bottom up change lead to more of the same where it’s needed the most, among those of us ’born in the USA!’“

—Steve Early, former organizer for the Communications Workers of America and author of Save Our Unions: Dispatches from a Movement in Distress

This book is a crucial analytical and tactical handbook for workers protesting against management. In most cases, protests, strikes, and insurgencies are only measured through government data. New Forms of Worker Organization provides independent information on workers’ protest, their reasons, and the nature in which they are realized—essential for understanding the true shape of the workers movements in countries throughout the world. This research should be used by workers and labor unions as a tool to reach their objectives and to protect and advance workers’ rights.“

—Vadim Borisov, representative IndustriALL Global Union, CIS Region, sociologist, and author of over 100 publications on workers’ movements in Russia, including Workers and the Transition to Capitalism in Russia (Verso)

“Working people everywhere are feeling the pressure in a world where corporations increasingly dominate our economic, political, and social lives. In country after country, traditional unionism, advocacy, and policy reform have been proven unfit for the task of restoring the dignity and financial security of working families. The critical stories of cutting-edge organizing found in New Forms of Worker Organization demonstrate that workers themselves hold the key to creating a world where work is honored and freedom of association is absolute.“

“This exciting collection provides substantial evidence that collective action by workers themselves is indispensable to advancing a strong labor movement. The book’s global scope demonstrates that workers in the U.S. and beyond can learn much from the tactics, strategies, and historical struggles in other countries.“

“Conventional unionism’s decline over recent decades and now capitalism’s worst global crisis since the 1930s are enabling and provoking unconventional forms of workers’ struggles. Some are new and others are new versions of old forms with urgently renewed relevance today. Received concepts and theories of class, class struggle, economic democracy, workers’ power, socialism and communism are being reexamined and changed to meet the practical needs and conditions of anticapitalist struggle now. Immanuel Ness’s new volume documents some dramatic new projects of self-conscious class struggle around the world.“

Immanuel Ness is a political economist who specializes in labor unions and professor of Political Science at City University of New York. He is editor of WorkingUSA: The Journal of Labor and Society and author of numerous works including Guest Workers and Resistance to U.S. Corporate Despotism. He was a worker and union organizer in the food, maintenance, and publishing industries.

Staughton Lynd taught American history at Spelman College and Yale University. He was director of Freedom Schools in the 1964 Mississippi Freedom Summer. An early leader of the movement against the Vietnam War, he was blacklisted and unable to continue as an academic. He then became a lawyer, and in this capacity has assisted rank-and-file workers and prisoners for the past thirty years. He has written, edited, or coedited with his wife Alice Lynd more than a dozen books.

See and hear editor interviews, book reviews, and other news on the Editor’s Page HERE.