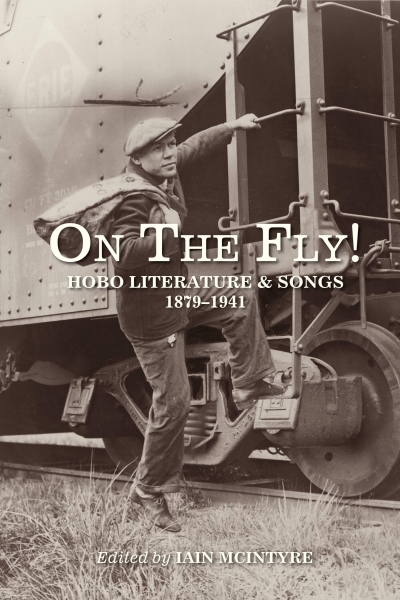 On the Fly! Hobo Literature and Songs, 1879–1941
Edited by Iain McIntyre
This anthology brings forth the lost voices of Hobohemia.

From the 1870s until the Second World War, millions of Americans left their homes to board freight trains that would carry them vast distances, sometimes to waiting work, often to points unknown. Congregating in skid rows, socializing around campfires, and bringing in the nation’s crops, these drifters were set apart from conformist America by a lifestyle possessing its own haunts, vocabulary, and cultural, sexual, and ethical standards. Alternately derided and lionized for their footloose ways and nonconformity, hoboes played a crucial and largely neglected role in the creation of not only America’s infrastructure, industry, and agriculture but also its culture, politics, and music.

The first anthology of its kind, On the Fly! brings forth the lost voices of Hobohemia. Dozens of stories, poems, songs, stories, and articles produced by hoboes are brought together to create an insider history of the subculture’s rise and fall. Adrenaline-charged tales of train hopping, scams, and political agitation are combined with humorous and satirical songs, razor sharp reportage and unique insights into the lives of the women and men who crisscrossed America in search of survival and adventure.

From iconic figures such as labor martyr Joe Hill and socialist novelist Jack London through to pioneering blues and country musicians, and little known correspondents for the likes of the Hobo News, the authors and songwriters contained in On the Fly! run the full gamut of Hobohemia’s wide cultural and geographical embrace. With little of the original memoirs, literature, and verse remaining in print, this collection, aided by a glossary of hobo vernacular and numerous illustrations and photos, provides a comprehensive and entertaining guide to the life and times of a uniquely American icon. Read on to enter a world where hoboes, tramps, radicals, and bums gather in jungles, flop houses, and boxcars; where gandy dancers, bindlestiffs, and timber beasts roam the rails once more.