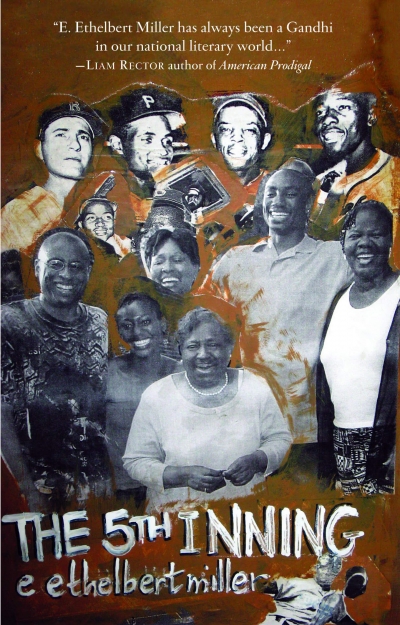 The 5th Inning is poet and literary activist E. Ethelbert Miller’s second memoir. Coming after Fathering Words: The Making of an African American Writer (published in 2000), this book finds Miller returning to baseball, the game of his youth, in order to find the metaphor that will provide the measurement of his life. At 60, he ponders whether his life can now be entered into the official record books as a success or failure.

The 5th Inning is one man’s examination of personal relationships, depression, love and loss. This is a story of the individual alone on the pitching mound or in the batters box. It’s a box score filled with remembrance. It’s a combination of baseball and the blues. The paperback has an additional chapter.

“Traditionally, it’s viewed as a female occupation, to strip away the layers and examine the experience of relationships with a partner, with children, within one’s own interior emotional life. Here comes a strong, real male voice, exploring the terrifying territory of growing older–in a marriage, in a family, in one’s body.  Ethelbert Miller writes with naked honesty and courage about what it is to be a man no longer young. Youth may have left him. Passion has not.” —Joyce Maynard, author of At Home in the World

“The 5th Inning is a poetic meditation as much as a memoir. Ethelbert brings his poet’s eye to the game of baseball and transforms it into a metaphor for a life that knows strikes, groundouts, and errors as well as the beauty of a ball sailing straight across homeplate.” –Josephine Reed, WPFW

“Ethelbert Miller brings an accomplished poet’s stunning language to this important memoir, and no one writes more eloquently about the lives–the triumphs and dilemmas–of black American men than he does.” –Charles Johnson, author of Middle Passage, on Fathering Words

E. Ethelbert Miller is a literary activist. He is board chair of the Institute for Policy Studies (IPS). He is also a board member of The Writer’s Center and editor of Poet Lore magazine. The author of several collections of poems, his last book How We Sleep On The Nights We Don’t Make Love (Curbstone Press, 2004) was an Independent Publisher Award Finalist. Miller received the 1995 O.B. Hardison Jr. Poetry Prize. He was awarded in 1996 an honorary doctorate of literature from Emory & Henry College. In 2003 his memoir Fathering Words: The Making of An African American Writer (St. Martin’s Press, 2000) was selected by the DC WE READ for its one book, one city program sponsored by the D.C. Public Libraries. In 2004 Miller was awarded a Fulbright to visit Israel. Poets & Writers presented him with the 2007 Barnes & Noble/Writers for Writers Award. Mr. Miller is often heard on National Public Radio (NPR).

Click here for a one page sales sheet (paperback).

Click here for a one page sales sheet (hardcover).