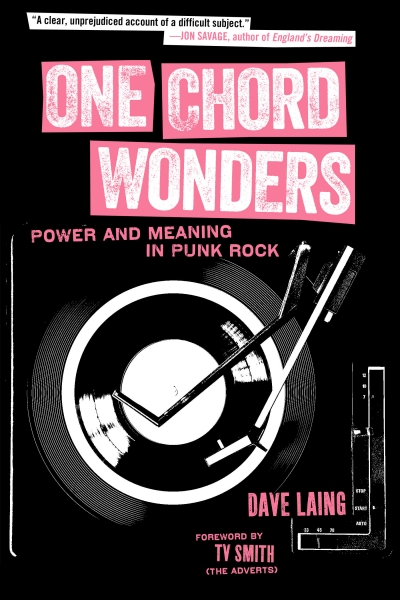 One Chord Wonders: Power and Meaning in Punk Rock

This book argues that a significant political achievement of punk was to expose the operations of power in the British entertainment industry as they were thrown into confusion by the sound and the fury of musicians and fans.

Originally published in 1985, One Chord Wonders was the first full-length study of the glory years of British punk rock. The book argues that one of punk’s most significant political achievements was to expose the operations of power in the British entertainment industries as they were thrown into confusion by the sound and the fury of musicians and fans.

Through a detailed examination of the conditions under which punk emerged and then declined, Dave Laing develops a view of the music as both complex and contradictory. Special attention is paid to the relationship between punk and the music industry of the late 1970s, in particular the political economy of the independent record companies through which much of punk was distributed. The rise of punk is also linked to the febrile political atmosphere of Britain in the mid-1970s.

Using examples from a wide range of bands, individual chapters use the techniques of semiology to consider the radical approach to naming in punk (from Johnny Rotten to Poly Styrene), the instrumental and vocal sound of the music, and its visual images. Another section analyses the influence of British punk in Europe prior to the music’s division into “real punk” and “post-punk” genres.

The concluding chapter critically examines various theoretical explanations of the punk phenomenon, including the class origins of its protagonists and the influential view that punk represented the latest in a line of British youth “subcultures.” There is also a chronology of the punk era, plus discographies and a bibliography.

Dave Laing has been researching and writing about popular music, its business, and its politics for over forty years. His books include The Sound of Our Time (1969), One Chord Wonders (1985), and Buddy Holly (2010). He was a coeditor of The Faber Companion to 20th Century Popular Music (1990) and the Continuum Encyclopedia of Popular Music of the World (2003). He has contributed to several edited collections including Global Pop, Local Language (2003), The Popular Music Studies Reader, (2006) and The Cambridge Companion to The Beatles (2009). He is associate editor of the journal Popular Music History and an honorary research fellow at the University of Liverpool.

TV Smith was founder, member, singer, and songwriter for The Adverts, who formed in late 1976, and became one of the leading bands in the first wave of British punk rock. Fiercely independent and determinedly embodying the original spirit of punk rock, TV continues to tour the world, bringing his epic solo show to ever-increasing audiences.