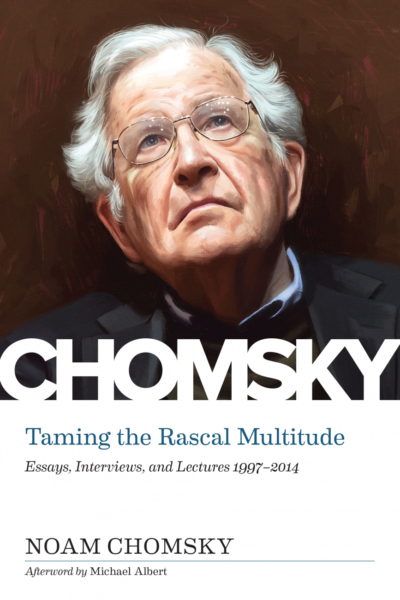 Noam Chomsky
A selection of Chomsky’s essays and interviews from 1997-2014.

As Noam Chomsky writes about something—US foreign policy, corporate policies, an election, or a movement—he not only specifically recounts the facts of the topic but also exercises blisteringly relentless logic to discern the interconnections between the evidence and broader themes involved.

Taming the Rascal Multitude is a judicious selection of essays and interviews from Z Magazine from 1997 to 2014. In each, Chomsky takes up some question of the moment and situates what followed even without having known what would follow. They explicate what preceded the current era and provide a how-to for successfully comprehending social events and relations. They are a pleasure to read, much like the pleasure of watching a great athlete or performer, but they also edify. They educate.

Reading Chomsky is about understanding how society works, how people relate to society and social trends, and, beyond the specifics, how to approach events, relations, occurrences, and patterns in a way that reveals their inner meanings and their outer connections and implications. It is like reading the best you can get about topic after topic, and, more, it is like watching a master craftsperson in a discipline that ought to be all of ours understanding the world to change it.

Noam Chomsky is a laureate professor at the University of Arizona and professor emeritus in the MIT Department of Linguistics and Philosophy. Chomsky’s work is widely credited with having revolutionized the field of modern linguistics and he is one of the foremost critics of US foreign policy. He has published numerous groundbreaking books, articles, and essays on global politics, history, and linguistics. His recent books include Who Rules the World? and A New World in Our Hearts.

Michael Albert is an organizer, publisher, teacher, and author of over twenty books and hundreds of articles. He cofounded South End Press, Z Magazine, the Z Media Institute, ZNet, and various other projects, and works full time for Z Communications. He is the author of Practical Utopia: Strategies for a Desirable Society.

Lydia Sargent was a founder and original member of the South End Press Collective as well as Z Magazine, which she coedited. Her plays include I Read About My Death in Vogue Magazine and, with Maxine Klein and Howard Zinn, Playbook. She also edited Women and Revolution: A Discussion of the Unhappy Marriage of Marxism and Feminism.