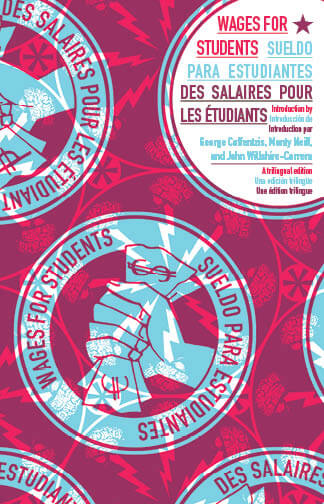 “We are fed up with working for free. We must force capital, which profits from our work, to pay for our schoolwork. Only in this way can we seize more power to use in our dealings with capital.”
This trilingual edition includes an introduction by the original authors and a transcript of a collective discussion between participants and scholars, reflecting on the campaign (then) and the realities of today (now).

Wages for Students was published anonymously by three activists in the fall of 1975. It was written as “a pamphlet in the form of a blue book” by activists linked to the journal Zerowork during student strikes in Massachusetts and New York.

Deeply influenced by the Wages for Housework Campaign’s analysis of capitalism, and relating to struggles such as Black Power, anticolonial resistance, and the antiwar movements, the authors fought against the role of universities as conceived by capital and its state. The pamphlet debates the strategies of the student movement at the time and denounces the regime of forced unpaid work imposed every day upon millions of students. Wages for Students was an affront to and a campaign against the neoliberalization of the university, at a time when this process was just beginning. Forty years later, the highly profitable business of education not only continues to exploit the unpaid labor of students, but now also makes them pay for it. Today, when the student debt situation has us all up to our necks, and when students around the world are refusing to continue this collaborationism, we again make this booklet available “for education against education.”

This new trilingual edition includes an introduction by George Caffentzis, Monty Neill, and John Willshire-Carrera alongside a transcript of a collective discussion organized by Jakob Jakobsen, Malav Kanuga, Ayreen Anastas, and Rene Gabri, following a public reading of the pamphlet by George Caffentzis, Silvia Federici, Cooper Union students, and other members and friends of 16 Beaver.

Wages for Students was anonymously authored and published in the fall of 1975 by George Caffentzis, Monty Neill, and John Willshire-Carrera, three activists associated with the journal Zerowork and later with the Midnight Notes Collective. This trilingual edition includes an introduction by the original authors and is edited by Jakob Jakobsen, María Berríos, and Malav Kanuga.