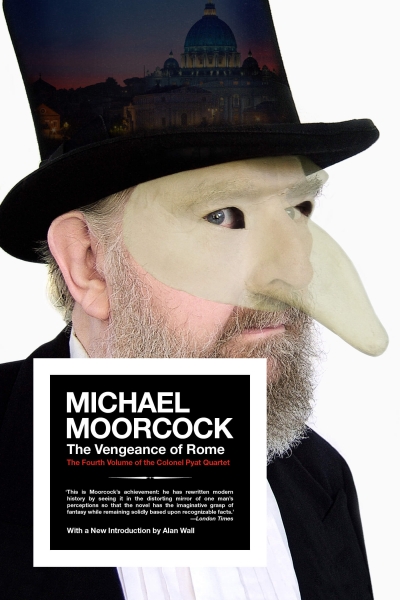 The Vengeance of Rome: The Fourth Volume of the Colonel Pyat Quartet

Now the quartet is complete. Pyat keeps his appointment with the age’s worst nightmare.

Byzantium Endures, the first volume of Michael Moorcock’s legendary Pyat Quartet, appeared in 1981. The Laughter of Carthage (1984) and Jerusalem Commands (1992) followed. Now the quartet is complete. Pyat keeps his appointment with the age’s worst nightmare.

Born in Ukraine on the first day of the century, a Jewish antisemite, Pyat careered through three decades like a runaway train. Bisexual, cocaine-loving engineer/inventor/spy, he enthusiastically embraces Fascism. Hero-worshipping Mussolini, he enters the dictator’s circle, enjoys a close friendship with Mussolini’s wife and is sent by the Duce on a secret mission to Munich, becoming intimate with Ernst RÃ¶hm, the homosexual stormtrooper leader. His crucial role in the Nazi Party’s struggle for power has him performing perverted sex acts with “Alf,” as the FÃ¼hrer’s friends call him.

Pyat’s extraordinary luck leaves him after he witnesses Hitler’s massacre of RÃ¶hm and the SA. At last he is swallowed up in Dachau concentration camp. Thirty years later, having survived the Spanish Civil War, he is living in Portobello Road and telling his tale to a writer called Moorcock.

This authoritative edition presents this work for the first time in the United States, along with a new introduction by Alan Wall.

About Michael Moorcock:
Born in London in 1939, Michael Moorcock now lives in Texas and Paris, France. A prolific and award-winning writer with more than eighty works of fiction and nonfiction to his name, he is the creator of Elric, Jerry Cornelius, and Colonel Pyat amongst many other memorable characters.

About Alan Wall (Introduction):
Alan Wall is a novelist, short story writer, poet, and essayist. His novels include Bless the Thief, The Lightning Cage, The School of Night, China, and Sylvie’s Riddle. He is currently professor of writing and Literature at the University of Chester.