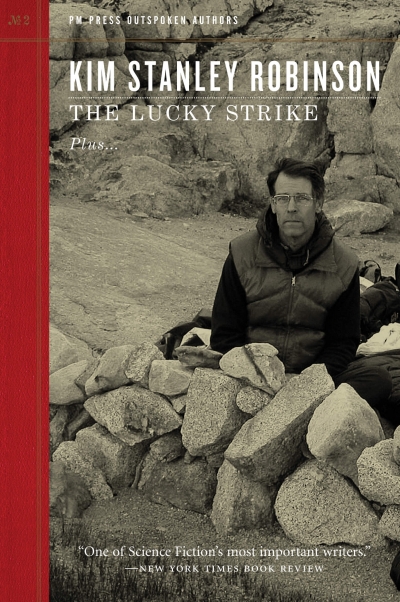 This astounding alternate history tale presents a dramatic encounter with destiny wrapped around the terrifying question of what might have happened if the fateful bomber flight over Hiroshima had gone a bit differently.

Combining dazzling speculation with a profoundly humanist vision, Kim Stanley Robinson is known as not only the most literary but also the most progressive (read “radical”) of today’s top rank SF authors.  His bestselling Mars Trilogy tells the epic story of the future colonization of the red planet, and the revolution that inevitably follows. The Years of Rice and Salt is based on a devastatingly simple idea: If the medieval plague had wiped out all of Europe, what would our world look like today? His novel Galileo’s Dream is a stunning combination of historical drama and far-flung space opera, in which the ten dimensions of the universe itself are rewoven to ensnare history’s most notorious torturers.

“The Lucky Strike,” the classic and controversial story Robinson has chosen for PM’s Outspoken Authors series, begins on a lonely Pacific island, where a crew of untested men are about to take off in an untried aircraft with a deadly payload that will change our world forever. Until something goes wonderfully wrong …

Plus: “A Sensitive Dependence on Initial Conditions,”  in which Robinson dramatically deconstructs “alternate history” to explore what might have been if things had gone differently over Hiroshima that day. As with all Outspoken Author books, there is a deep interview and autobiography: at length, in-depth, no-holds-barred, and all-bets-off: an extended tour though the mind and work, the history and politics of our Outspoken Author. Surprises are promised.

About the Author:
Born in 1952, a Californian through and through, Kim Stanley Robinson grew up in Orange County, surfed his way through UC San Diego (writing his doctoral thesis on Philip K. Dick), and now lives in Davis with two kids and a beautiful scientist wife. He spends several weeks a year above 11,500 feet in the high Sierras. Not surprisingly, he’s a good friend of Gary Snyder.

Click here for a one page product sheet on this product