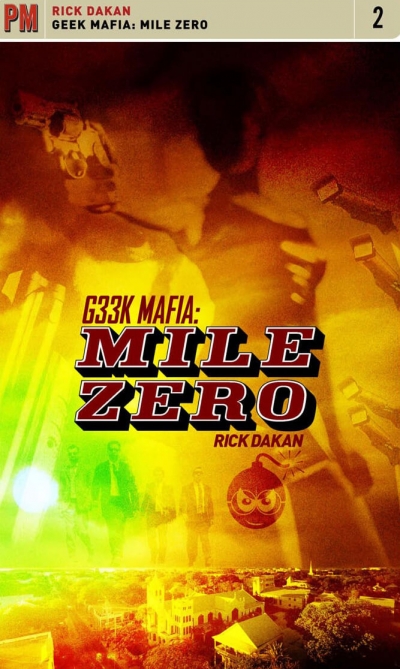 Rick Dakan
Key West-southernmost point in the United States, Mile Zero on Highway 1; and as far as you can run away from your past troubles without swimming to Cuba.

Inspired by author Rick Dakan’s own eventful experiences in the video game and comic book industries, the Geek Mafia series satisfies the hunger in all of us to buck the system, take revenge on corporate America, and live a life of excitement and adventure.

Key West—southernmost point in the United States, Mile Zero on Highway 1; and as far as you can run away from your past troubles without swimming to Cuba. Key West—originally Cayo Huesos or Isle of Bones, for centuries a refuge for pirates, wreckers, writers, scoundrels, drunks, and tourists. Now home to a Crew of techno geek con artists who’ve turned it into their own private hunting ground. Paul and Chloe have the run of the sun-drenched island, free to play and scam far from the enemies they left behind in Silicon Valley. But that doesn’t mean they can’t bring a little high tech know how to the paradise. They and their new Crew have covered the island with their own private Big Brother style network—hidden cameras, RFID sensors, and a web of informers that tip them off about every crime committed and tourist trapped on the island. But will all the gadgets and games be enough when not one but three rival crews of con artists come to hold a top-secret gang summit? And when one of them is murdered, who will solve the crime?

About the Author:
Rick Dakan lives, writes, and plays in Sarasota, Florida, his home and native town. Born in 1972, he grew up in Florida before going on to attend college at American University in Washington DC (where he earned a BA in History) and then Ohio State University (where he didn’t earn an MA in History). It was in those bleak, cold, Ohio years of the mid-90’s that be started writing for a living, and he hasn’t stopped since. Over the next few years he scratched out a rewarding if poor living writing role-playing game books for numerous product lines, including: Wraith: The Oblivion, Kult, Conspiracy X, Deadlands, Vampire: The Masquerade, and Dungeons & Dragons.

In 2000 he came up with an idea for an online computer game which eventually became the hit 2004 release City of Heroes. Teaming up with long-time friend Michael Lewis and a bevy of talented folks, he moved out to San Jose, California and helped found Cryptic Studios. Three years later his partners fired him, but that didn’t stop him from continuing to work on the game and writing and publishing a twelve issue comic book series based on the game. He wrote his first novel, Geek Mafia, in 2005.