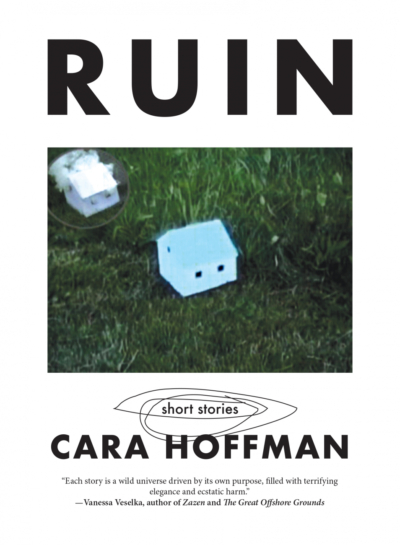 short stories by Cara Hoffman
Both timely and timeless in its examination of an American state in free-fall. The ultimate effect of these stories is one of invigoration and a sense of possibilities—hope for a new world extracted from the rubble of the old.

A little girl who disguises herself as an old man, an addict who collects dollhouse furniture, a crime reporter confronted by a talking dog, a painter trying to prove the non-existence of god, and lovers in a penal colony who communicate through technical drawings—these are just a few of the characters who live among the ruins. RUIN is both bracingly timely and eerily timeless in its examination of an American state in free-fall, unsparing in its disregard for broken institutions, while shining with compassion for all who are left in their wake. Cara Hoffman’s short fictions are brutal, surreal, hilarious, and transgressive, celebrating the sharp beauty of outsiders and the infinitely creative ways humans muster psychic resistance under oppressive conditions. The ultimate effect of these ten interconnected stories is one of invigoration and a sense of possibilities—hope for a new world extracted from the rubble of the old.

“One should not pick favorites, but I’ll say it anyway; Cara Hoffman is my favorite living American writer. In her latest work, RUIN, each story is a wild universe driven by its own purpose, filled with terrifying elegance and ecstatic harm. I never wonder why what she’s telling me matters. Brilliant and anti-redemptive, she traces the desire of her characters with surgical dexterity, each red line exposing life.”
—Vanessa Veselka, author of the National Book Award–nominated The Great Offshore Grounds

“Hoffman writes with a restraint that makes poetry of pain.”
—The New York Times Book Review

“Tough, scarred, feral and sexy. The book and the characters refuse to conform and like in all good outlaw literature [Hoffman] takes sharp aim at the contemporary culture’s willingness to do so.”
—Justin Torres, author of We the Animals

“Hoffman maps the atmosphere of paranoia that descends on a formerly tranquil town as she moves deftly between its inhabitants.”
—The New Yorker

“Hoffman writes like a dream—a disturbing, emotionally charged dream that resolves into a surprisingly satisfying and redemptive vision.”
—The Wall Street Journal

“A fearless storyteller with great insight.”
—Bill Wolfe, Read Her Like an Open Book

“The stories of RUIN deftly display the horror and ugliness of our culture of violence and consumption, yet also reveal the delicate humanity within our collective yearning. Reading Cara Hoffman’s fiction makes me not only want to write better, but to be better.”
—Paul Tremblay, author of A Head Full of Ghosts and The Cabin at the End of the World

“RUIN is a collection of ten jewels, each multi-faceted and glittering, to be experienced with awe and joy. Cara Hoffman has seen a secret world right next to our own, just around the corner, and written us a field guide to what she’s found. I love this book.”
—Sara Gran, author of Infinite Blacktop and Claire Dewitt and the City of the Dead

“A gothic pastoral; a world of such beauty and menace that you scarcely recognize it as your own. Like Ambrose Bierce and Shirley Jackson, Hoffman has rediscovered America. Welcome Home.”
—Annia Ciezadlo, author of Day of Honey

“Hoffman’s spare and delightfully strange stories are shot through with frequent flashes of sudden beauty. RUIN contains the seeds of her later award-winning fiction, along with her already fully formed voice. Each story in one way or another feels implicitly apocalyptic, in both senses of the word—the end of the world and unveiling.”
—Panagiotis Kechagias, author of Final Warning

“Cara Hoffman’s short fiction is as tense and rich with the opaque and the precise as a painting by Leonora Carrington.”
—Molly Tanzer, author of Vermilion and Creatures of Will and Temper

“If there is such a thing as ‘anarchist fiction,’ it must be fiction that breaks all the rules of time and space, of realism and the fantastic, of fact and feelings. RUIN is true, exciting, anarchist fiction.”
—Nick Mamatas, author of The People’s Republic of Everything and The Second Shooter

“RUIN, like all the best story collections, is a glittering, abstract mosaic. From the uneasy fairy-tale rhythms of “They” to the gritty, reality-shattering “The Paragrapher” to the smooth, bitter drink that is “Childhood,” each of these stories showcases a different aspect of Hoffman’s razor-sharp talent—but they all demand that we confront hard truths and self-delusions. A treat for both fans of her novels and aficionados of the short story as an art form.”
—Carrie Laben, author of A Hawk in the Woods

About the Author
Cara Hoffman is the author of three New York Times Editors’ Choice novels; the most recent, Running, was named a Best Book of the Year by Esquire Magazine. She first received national attention in 2011 with the publication of So Much Pretty which sparked a national dialogue on violence and retribution, and was named a Best Novel of the Year by the New York Times Book Review. Her second novel, Be Safe I Love You was nominated for a Folio Prize, named one of the Five Best Modern War Novels, and awarded a Sundance Global Filmmaking Award. A MacDowell Fellow and an Edward Albee Fellow, she has lectured at Oxford University’s Rhodes Global Scholars Symposium and at the Renewing the Anarchist Tradition Conference. Her work has appeared in the New York Times, Paris Review, BOMB, Bookforum, Rolling Stone, Daily Beast, and on NPR. A founding editor of the Anarchist Review of Books, and part of the Athens Workshop collective, she lives in Athens, Greece with her partner.