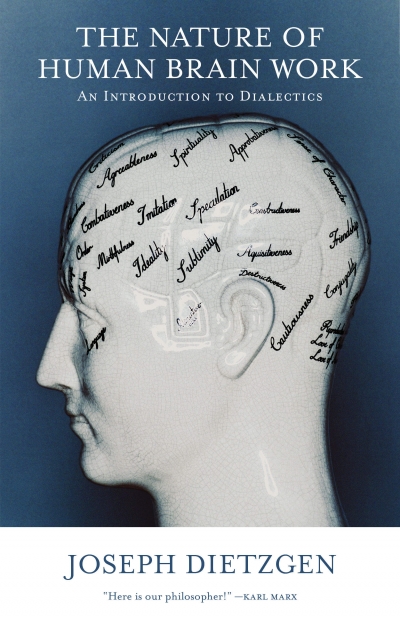 The Nature of Human Brain Work: An Introduction to Dialectics

This primer on dialectical materialism is the first and best-known work of the pioneering socialist philosopher Joseph Dietzgen.

Called by Marx “The Philosopher of Socialism,” Joseph Dietzgen was a pioneer of dialectical materialism and a fundamental influence on anarchist and socialist thought who we would do well not to forget.

Dietzgen examines what we do when we think. He discovered that thinking is a process involving two opposing processes: generalization, and specialization. All thought is therefore a dialectical process. Our knowledge is inherently limited however, which makes truth relative and the seeking of truth on-going. The only absolute is existence itself, or the universe, everything else is limited or relative. Although a philosophical materialist, he extended these concepts to include all that was real, existing or had an impact upon the world. Thought and matter were no longer radically separated as in older forms of materialism. The Nature of Human Brain Work is vital for theorists today in that it lays the basis for a non-dogmatic, flexible, non-sectarian, yet principled socialist politics.

“Here is our philosopher!” –Karl Marx

“…brilliant contributions to the theory of knowledge.” –Anton Pannekoek

“Left…a fine legacy of wisdom in his writings” –Friedrich A. Sorge

Born near Cologne in 1828, Joseph Dietzgen worked most of his life as a tanner. A self-educated man, he participated in the Revolution of 1848 where he first read the writings of Karl Marx and became one of his supporters. Exiled from Germany after the failed revolution, he spent time in both America and Russia, where he wrote his most famous work The Nature of Human Brain Work, published in 1869, before returning to Germany. In 1884 he moved to the United States for the third and last time after being imprisoned in Germany for his political writing. He became editor of the anarchist Chicagoer Arbeiterzeitung when it’s previous editors were hung by the State in response to the Haymarket bombings. When he died 2 years later he was buried beside them in Chicago.

Larry Gambone grew up in logging towns on Vancouver Island, British Columbia, where he was active in the anti-nuclear weapons ‘Ban-the-Bomb’ movement. He attended Simon Fraser University between 1967-70 and was involved in the campus New Left. He formed a campus IWW branch, and later joined the Vancouver Yippies. Gambone briefly lived on a commune in the Kootenays in the 1970’s, helped form the anarchist paper Open Road and became involved in the Surrealist Movement. In the 1980’s he began a serious study of working class movements and the autodidact thinkers that influenced them, which lead to an interest in the writings of Joseph Dietzgen. Gambone remains active in his community and continues to study and write about anarchism and other social movements.