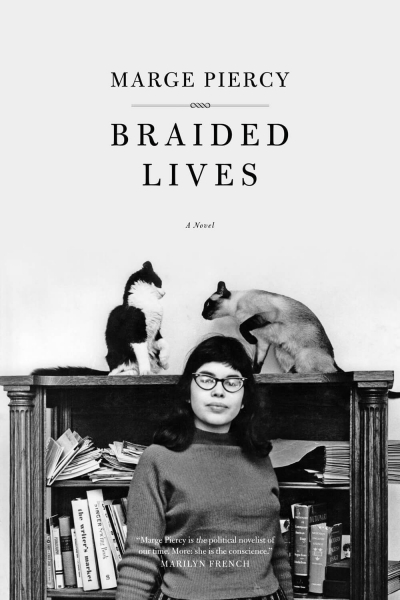 Marge Piercy turns her considerable skill and passion to the Fifties in this portrait of women in transition from repression to freedom. This new edition features a new introduction by the author.

Marge Piercy carries her portrait of the American experience back into the Fifties—that closed, repressive time in which forces for the upheavals of the Sixties ticked away underground. Spanning twenty years, and teeming with vivid characters, Braided Lives tells the powerful, unsentimental story of two young women coming of age.

Jill, fiercely independent, dark, Jewish, an intellectual with Detroit street smarts, is a poet, curious, avid of life—a “professional student” and sometime thief. Donna, Jill’s cousin and closest friend, is blond, pretty, and alluring. Together, they grow and change at college in Ann Arbor, where the life of poets and painters contrasts sharply with the working-class neighborhood where Jill’s family lives.

In Michigan, and afterward in New York City, the two women taste love and betrayal, friendship and pain, independence and fear as they reach a deepening understanding that to control their lives they must fight. And though their fates differ as widely as their personalities, both reflect the danger that sex posed at a time when abortions were illegal and an affair could destroy a woman’s life, making the outcome of a chance encounter or a night of love a matter of life and death.

Braided Lives is an enduring portrait of the past that has led to our tenuous present. In her new introduction to this edition, Marge Piercy reflects on both the most autobiographical of her novels, and the ongoing battles to ensure the hard-fought victories of the Sixties and Seventies, particularly around sex and reproductive rights.

About Marge Piercy:
Marge Piercy is the author of seventeen novels including the national bestsellers Gone to Soldiers, Braided Lives, and Woman on the Edge of Time; seventeen volumes of poetry, and a critically acclaimed memoir, Sleeping with Cats. Born in center-city Detroit, educated at the University of Michigan, the recipient of four honorary doctorates, she has been a key player in many of the major progressive political battles of our time, including the anti-Vietnam War and the women’s movements, and more recently an active participant in the resistance to the war in Iraq.