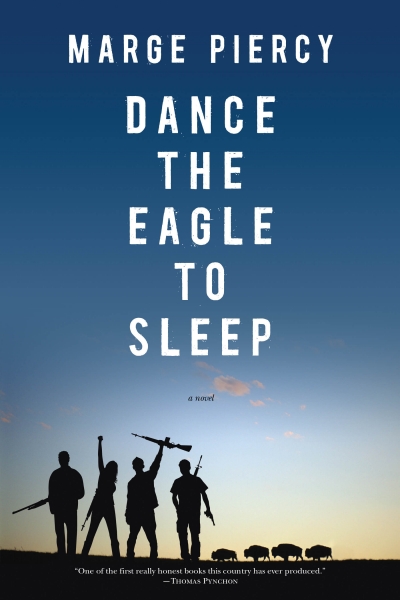 Dance the Eagle to Sleep: A Novel

Originally published in 1970, Marge Piercy’s second novel follows the lives of four teenagers in a near-future society, as they rebel against a military draft and “the system.”

Originally published in 1970, Marge Piercy’s second novel follows the lives of four teenagers, in a near-future society, as they rebel against a military draft and “the system.” The occupation of Franklin High School begins, and with it, the open rebellion of America’s youth against their channelled, unrewarding lives and the self-serving, plastic society that directs them.

From the disillusionment and alienation of the young at the center of the revolt, to their attempts to build a visionary new society, the nationwide following they gain and the brutally complete repression that inevitably follows, this is a future fiction without a drop of fantasy. As driving, violent, and nuanced today as it was 40 years ago, this anniversary edition includes a new introduction by the author reflecting unapologetically on the novel and the times from which it emerged.

About the Author:
Marge Piercy is the author of seventeen novels including the national bestsellers Gone To Soldiers, Braided Lives, and Woman on the Edge of Time; seventeen volumes of poetry, and a critically acclaimed memoir, Sleeping with Cats. Born in center city Detroit, educated at the University of Michigan, the recipient of four honorary doctorates, she has been a key player in many of the major progressive political battles of our time, including the anti-Vietnam war and the women’s movement, and more recently an active participant in the resistance to the war in Iraq.