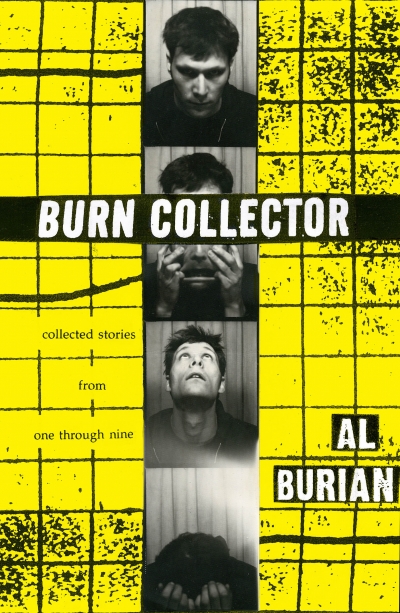 Burn Collector: Collected Stories from One through Nine

Burn Collector compiles the first nine issues of Al Burian’s sporadically published and widely acclaimed personal zine. A re-release of the cult classic, with a new introduction by the author.

Burn Collector compiles the first nine issues of Al Burian’s sporadically published and widely acclaimed personal zine. Beginning in the mid-nineties, Burian distributed his work through the tight-knit network of the DIY punk music scene. Burn Collector caught on because of its unusual content—in a scene rife with dogmatic political diatribes and bland record reviews, Burian presented his readers with humorous anecdotes, philosophical musings, and nuanced descriptions of odd locales and curious characters, taken mostly from outside of the punk milieu—and also because of the author’s narrative voice, which reflected the literary influences of Celine, Henry Miller, or even David Sedaris more than the influence of his contemporaries in the zine world. The writing in Burn Collector blueprinted a post-punk persona that was smart, strange, political but not correct, attached to subculture, but striving also for a connection to the world at large, and to the greater themes of human existence.

The book went through six printings, along the way garnering acclaim from readers, inspiring a film (Matt McCormick’s 2009, Some Days are Better than Others) and a major label album (Thrice’s 2003, The Artist in the Ambulance). More importantly, the book inspired readers to write and self-publish: to do it themselves, in the true punk spirit.

“This book offers a look back on the very best that the DIY punk movement of the ’90s had to offer. But it’s no history lesson, written more than a decade ago, each one of these stories transcends confines of eras and becomes something better: writing that lasts. Al would probably deny it but reading these stories again it’s quite clear that he was the voice of a generation.”

“Burn Collector is best read aloud, alone, line by line as each piece’s train wreck unfolds. Al’s shrugging, self-deprecating tales camouflage a truly hopeful and humanizing perspective, and are as biting and relevant as they are unassuming. Al Burian writes for the naked hundred-watt bulbs dangling in everyone’s busted bedrooms.”

“Al Burian’s Burn Collector is a literary kick in the shins. Wake up and read this. From the turbulence of personal relationships to the hazards of travel to the search for something resembling meaning in this bad-looking twenty-first century, Mr. Burian’s work is fierce, insightful, and uncompromisingly wise.”

–Joe Meno, author of Hairstyles of the Damned

Al Burian, born 1971 in New Hampshire (state motto: “live free or die”); grew up in North Carolina (state motto: “to be and not to seem”); was an iconoclastic character at an early age. In his early 20s he began touring incessantly with bands, simultaneously producing small-run photocopied pamphlets (“zines”). He has published two collections of his zine output, Burn Collector (2000) and Natural Disaster (2007), as well as a book of comics, Things Are Meaning Less (2003). He lives in Berlin.