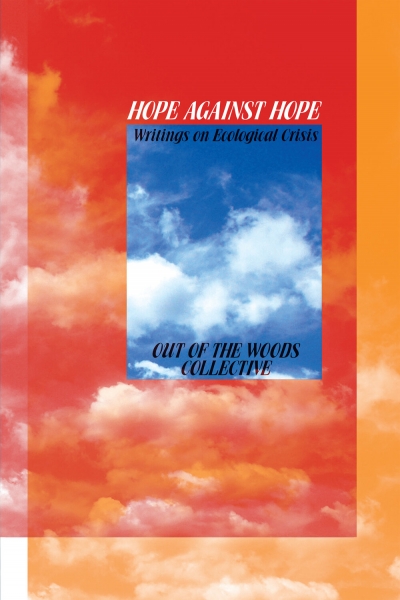 Climate disaster is here. Capitalism can’t fix it, not even with a Green New Deal. Our only hope against hope is disaster communism.

We are told we are living in the middle of a climate crisis of unprecedented proportions. As doomsday scenarios mount, hope collapses. Even as more and more people around the planet experience climate disaster as immediate and urgent as ever, our imagination and programs for transformation lag. The disasters are already here, and the crises, longstanding, are ongoing.

In Hope Against Hope, the Out of the Woods collective investigates the critical relation between climate change and capitalism and calls for the expansion of our conceptual toolbox to organize within and against ecological crisis characterized by deepening inequality, rising far-right movements, and—relatedly—more frequent and devastating disasters. While much of environmentalist and leftist discourse in this political moment remain oriented toward horizons that repeat and renew racist, anti-migrant, nationalist, and capitalist assumptions, Out of the Woods charts a revolutionary course adequate to our times.

At the center of the renewed political orientation Hope Against Hope expounds is an abolitionist approach to border imperialism, reactionary ecology, and state violence that underpins many green solutions and modes of understanding nature. It reminds us of the frequent moments and movements of solidarity emerging in the ruins all around us. Their stunning conclusion to the disarray of politics in our seemingly end times is the urgency of creating what Out of the Woods calls “disaster communism”—the collective power to transform our future political horizons from the ruins and establish a climate future based in common life.

Read an extract below:

Like disaster, communist struggle is differentiated. Those undertaking it are more often than not already feeling the sharp end of ecological crisis: Indigenous peoples, migrants, racialized people, women, prisoners, “queers,” workers, the poor, and the disabled. Isolated, their struggles can appear reactive, as if they provide only temporary local reliefs. Capital is all too eager to offset the costs of its ecological crisis onto those who suffer from it, attempting to turn coterminous struggles into self-ingesting infighting. When viewed together, the acts of these groups appear the prime motor of social change. We know not yet what we might do, and this unknowable togetherness, we call communism.

It is this which makes us hopeful, which wards off that damaging and self-fulfilling despair. Hope is our word for the grave but positive emotion which collectively emerges within the disastrous present, pushes against it, and expands beyond it. With Ernst Bloch, we insist that this hope is not expectation, nor even optimism. Rather, it is always against itself; warding off its tendency to become a fetish, sundered from solidarity and struggle. This is hope against hope.

The importance of being together and becoming together is one we feel strongly about as a collective. Through the simple repetition of talking and writing online, Out of the Woods has become an important part of all our lives, with shared study evolving into real care and solidarity. It has been a wonderful thing to write together: typing over each other in sprawling online documents, not remembering or caring which parts any individual wrote, piecing together our knowledges on things we already knew, teasing out from each other things we didn’t know we knew, and collectively addressing those things we did not and do not yet know. As a collection of essays-thus-far written, this book is by no means the culmination of our thought but a series of snapshots of thought-in-gestation. Any kind of conclusive finality is impossible for us. As in the struggles we advocate, this process of becoming together can have no destination at which it settles once and for all. We frequently disagree with each other about what we wrote yesterday, about what we are writing today. This too prevents any sense of finality, as does the fact that, come tomorrow, we want to be writing with each other again. Our thinking together is not complete because it can’t be completed, and even if it could, we wouldn’t want it to end anyway.

Writing as a collective under a shared name solidifies this becoming together. Yet we recognize that it can also play an obfuscatory role, allowing us to escape accountability for our histories and positions, and eliding our relationships to those power structures which reproduce the ecological crisis. Out of the Woods started from a call circulated online in English, predominantly shared in a communist milieu concentrated in the UK. The founding members were all loose acquain- tances and largely affiliated with UK universities, whether as staff or students. At this point, we were all white and all men. This probably reflected the nature of the call—a (perhaps uninviting) invitation to do unpaid theoretical work, with all the imbrications of privilege that inherently involves. The original composition of the collective was reflected in the readership we appealed to: a certain left-theory audience was implicit in our writing. In the years since, new people have joined Out of the Woods—primarily through Twitter. Others have stepped back. The collective is now spread across the United Kingdom and the United States, and while it is no longer all men and certainly not heterosexual, we are still all white— and several of us settlers in North America. We are undoubtedly beneficiaries of the nexus of raciality, capital, and colonialism. We take responsibility for and fight against being determined by that inheritance. Several of us still work on the margins of universities, as tenuous students, temporary lecturers, and administrators. It is important to keep in mind these situated perspectives as you read this book—not to invalidate our thought but to better specify it. What has (not) been written undoubtedly reflects those who have (not) written it. With this book complete, Out of the Woods will transform yet again, with the intention of further multiplying our positions against homogeneity. We invite you to contact us, and to think, write, and struggle with us.

When we formed Out of the Woods, we wanted to intervene against the consistent inadequacy of many existing narratives around the ecological crisis. We profoundly disagreed with mainstream environmentalism’s call for a unified humanity that might stand against a yet-to-come cataclysmic event. Simultaneously, we were appalled by the ways this homogenous conception of humanity coexists with moralizing critiques blaming cataclysm on an excess of humanity. Through such a process, cataclysm becomes too easily pinned on “dirty” developing countries, with their “rapidly” reproducing populations, and their “floods” of migrants.

Oppositions between the polluted and the pure, the populating and the con- trolled, and the migrating and the placebound all ultimately depend on another organizational divide: between white “civilization” and racialized “disorder.” The concept of “nature” serves as an avatar for white anxiety, making manifest fears around the loss of purity and control. Such fears can supposedly be overcome only through the imperial orchestration of intergovernmental organizations—or, a descent into war. The ecological crisis, while supposedly undifferentiated in its effects on humanity, is overdetermined in its causes.

As antiauthoritarian communists and anarchists, we oppose these articulations of environmentalism. However, we also find similar reasons to oppose many of the conventional leftist responses to the ecological crisis. Green anarchism, for example, has too often been focused on defending localized purity of autonomous zones, which in our view constitutes a dangerously introverted response to a glob- ally differentiated disaster. In its romantic attempts to find a pure nature to defend or return to, green anarchism has orchestrated another set of violences. At times, an essentialist conception of nature has been expanded into gender, with some (most infamously Deep Green Resistance) articulating transphobic views. Other anarchists—especially in North America—have used primitivism as an excuse to imitate and appropriate Indigeneity. Shockingly, criticisms of such projects have been labelled as sectarian slurs and intra-anarchist scuffles, rather than substantive disagreements. Unlike the well-circulated 2009 anonymous anarchist text Desert or the reactionary Dark Mountain Project, we are uninterested in a project of “nature-loving anarchism,” nor do we countenance such works’ trendy poetic nihilism disguised as sober realism. “Nature” today emphasizes only a separate and fall- en world. It is no real shock that nostalgia for a now-spoilt nature is a frequent theme in reactionary thought, the “romantic anticapitalism” that Iyko Day properly names. Such a racial project, she argues, is premised on both the appropriation of Indigenous lands and practices by settlers and the exclusion of those deemed corrupted by capital—Asians, Jews, and migrants more generally. Against romantic anticapitalism, then, we draw inspiration from Black, Indigenous, and anti-border anarchists and communists, for whom romantic anticapitalism can only reek of white supremacy.

This book reflects our desire to write something useful, to create something that makes it easier to understand the total interdependence of the extractions, exploitations, enslavements, and extirpations that colonial capital has brought upon this world. The brutal techniques of these myriad forms of ruination are too often reproduced in green aesthetics, politics, and practices. The logics of reactionary ecology, border imperialism, and racialized state violence are perpetuated and proliferated in environmentalism. Such a situation demands a different and differentiated response. We see such a response in inchoate tendencies all around us. This book is about the countless ways people survive amidst and against the ruins. We believe these shared strategies to survive ecological crises make a collective thriving within and beyond ruination possible. Thus, in the service of something that truly changes everything—which is to say planetary revolutions—we offer new concepts to hold together, and hold close, amidst the continuation of the crisis. Against gleeful doomsaying, romantic anticapitalism, and hopeful technofixes:

for a careful, yet fierce, queer cyborg ecology

built through a bricolage of tools, techniques, and knowledges already around us

to move within, against, and beyond the ecological crisis