View basket “Practical Utopia: Strategies for a Desirable Society” has been added to your basket. 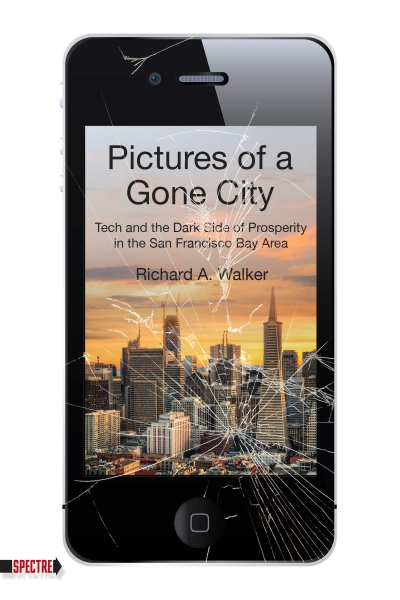 Pictures of a Gone City

– Tech and the Dark Side of Prosperity in the San Francisco Bay Area
written by Richard A. Walker
This sweeping account of the Bay Area in the age of the tech boom covers many bases.

The San Francisco Bay Area is currently the jewel in the crown of capitalism—the tech capital of the world and a gusher of wealth from the Silicon Gold Rush. It has been generating jobs, spawning new innovation, and spreading ideas that are changing lives everywhere. It boasts of being the Left Coast, the Greenest City, and the best place for workers in the USA. So what could be wrong? It may seem that the Bay Area has the best of it in Trump’s America, but there is a dark side of success: overheated bubbles and spectacular crashes; exploding inequality and millions of underpaid workers; a boiling housing crisis, mass displacement, and severe environmental damage; a delusional tech elite and complicity with the worst in American politics.

This sweeping account of the Bay Area in the age of the tech boom covers many bases. It begins with the phenomenal concentration of IT in Greater Silicon Valley, the fabulous economic growth of the bay region and the unbelievable wealth piling up for the 1% and high incomes of Upper Classes—in contrast to the fate of the working class and people of color earning poverty wages and struggling to keep their heads above water. The middle chapters survey the urban scene, including the greatest housing bubble in the United States, a metropolis exploding in every direction, and a geography turned inside out. Lastly, it hits the environmental impact of the boom, the fantastical ideology of TechWorld, and the political implications of the tech-led transformation of the bay region.

Richard A. Walker is professor emeritus of geography at the University of California, Berkeley, where he taught from 1975 to 2012. Walker has written on a diverse range of topics in economic, urban, and environmental geography, with scores of published articles to his credit. He is coauthor of The Capitalist Imperative (1989) and The New Social Economy (1992) and has written extensively on California, including The Conquest of Bread (2004), The Country in the City (2007) and The Atlas of California (2013).

Walker is currently director of the Living New Deal Project, whose purpose is to inventory all New Deal public works sites in the United States and recover the lost memory of government investment for the good of all. Walker now splits time between Berkeley and Burgundy.

See and hear author interviews, book reviews, and other news on Richard A. Walker’s page HERE