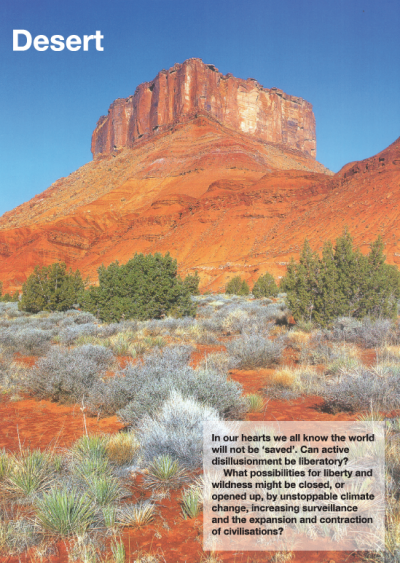 A gloves-off assault on optimism and the hope of saving the world.

“In our hearts we all know the world will not be ‘saved’. Can active disillusionment be liberatory? What possibilities for liberty and wildness might be closed, or opened up, by unstoppable climate change, increasing surveillance and the expansion and contraction of civilisations?” Deep green book on climate change, politics and civilisation, comprehensive footnotes.

Anonymously written and first published by Stac an Armin Press, in 2011. This edition from Active Distribution, 2019.

A text that plays significantly on the invisible committee’s concept of desert and also desertion, this is a gloves-off assault on optimism and the hope of saving the world. It asks the question “what does it mean to be an anarchist, or an environmentalist, when the goal is no longer working toward a global revolution and social/ecological sustainability?”

In some ways, this is the equivalent of Nihilist Communism for a green anarchist audience.